Attacking people with better grades than him.

Kimio Nonomura, also known as the Lynx Zodiarts, is an antagonist in Kamen Rider Fourze. He is one of the Zodiarts.

He was portrayed by Shohei Yamazaki.

The self-proclaimed "rival" of Kengo, Kimio sought to have the best grades in Amanogawa High. He received a Zodiarts Switch from the Libra Zodiarts that allowed him to transform into the Lynx Zodiarts. In his Zodiarts form, Kimio fought Fourze but forced him to detransform by taking JK hostage. Kamen Rider Meteor then appeared and started fighting the Zodiarts, overpowering him and defeating him with his Starlight Shower finisher.

The Lynx Zodiarts then reforms and Fourze attempts to finish him off with his Rider Rocket Drill Kick, but Meteor deflects the attack so he can see if Lynx has the power to evolve into the Aries Zodiarts.

Lynx later fought Fourze again, assisted by Stardust Ninja Dustards supplied by his "master" the Libra Zodiarts. Fourze beat down Lynx but before he could finish him off Lynx fled so Fourze gave chase with his Wheel Switch, becoming Elek States to defeat the Zodiarts. 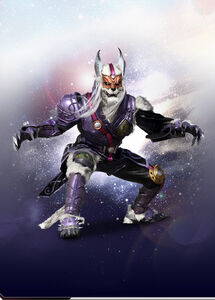