Kill Joe Dixon and steal a candy bar from his store before burning it down during The Purge (all failed).

In the year 2040, the next Purge is soon to begin. On the day of March 20, In Washington DC the NFFA revokes the Purge rule that ranking ten officials appearing to gain the public favor but are revoked when it is actually a front to kill Senator Charlie Roan, an opponent to the purge who is gaining political momentum.

The day before the Purge convenience store/deli owner Joe Dixon and his friend Laney confront teenager Kimmy and her friend for trying to steal a candy bar and trashing the place. She meets Laney Rucker were she mentions that she got all "whitish", and after recognizing her reputation as "Little Death" she gains her respect.

Later on Purge Night, she and a gang of her girlfriends/henchmen arrive at Joe's Store with a car that is completely covered with Christmas lights, she is dressed like a freak bride, wearing a mask reading 'KISS ME' and has some large guns (AK-47's) threatening to kill Joe and Marco also burn down the store,(After regaining the candy bar she wanted, that is).

She has become hysterical at this point, happily stating that she murdered her parents and Joe is next. They do fire a warning shot at her and ask her to leave. She arrives later with even more henchman and this time more determined to break in. The store is locked down, but Kimmy's friends eventually acquire two power saws and use them to slowly saw through the store's metal security door in an attempt to get in.

As Joe and the others prepare to defend themselves inside the store (and protect Senator Charlie Roan), Laney arrives and runs down Kimmy and one of her friends with the ambulance while they are dancing with joy in the street, Laney then kills the other girls before shooting Kimmy in the forehead point blank- killing her.

In the film, she is shown to be extremely rebellious and insurrectionary, refusing to put the candy bar back even when asked politely by Joe, and threatening to accuse him of rape if he tried to more forcefully take it back from her. She also has leadership qualities as she has lots of henchman on her side, she is also prone to wrathful outbursts. She may also suffer from some mental disorder, (possibly bi-polar) as she escalated the situation and made her conflict with the store owner(s) more than what it had to be as it cost her life in the end, all for over a candy bar.

She is very homicidal, destructive, stony-hearted and psychopathic, taking advantage of The Purge to murder her own parents and possibly other relatives and other victims. She is also a highly volatile and dangerous pyromaniac for wanting to burn down Joe's store. Overall, it is hard to determine if she used The Purge to vent her intensely negative feelings, or if this is her sympathetic and genuine personality. 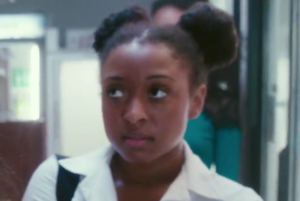 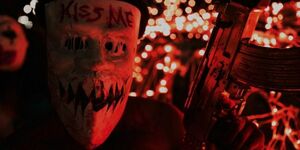 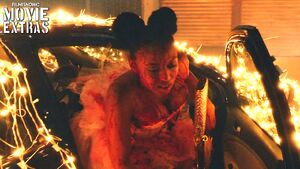 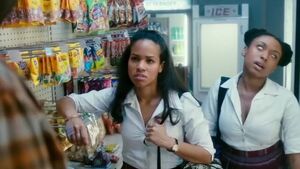 Kimmy is defeated and killed by Laney Rucker 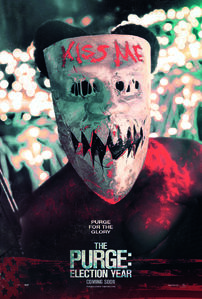 Kimmy in a promotional poster.
Add a photo to this gallery

Retrieved from "https://villains.fandom.com/wiki/Kimmy?oldid=3546967"
Community content is available under CC-BY-SA unless otherwise noted.