Student in University for Assassins

Playing with her flute.
Flirting with Travis.

Kill Travis, so see if she's a better assassin (failed).

Kimmy Howell is a character in No More Heroes 2: Desperate Struggle. She's an assassin-in-training in a University for Assassins.

Kimmy Howell is Travis Touchdown's number one fan and want to see if she is a better fighter than Travis, by decapitating him. She said to Travis that she was watching Travis' fight with Charlie MacDonald and was amazed with Travis. She wrote a letter to Travis to express her feelings for Travis. After Travis finished with her letter, Travis and Kimmy begin the fight. Kimmy mainly fights by twirling her Double Beam Kitana Flute. She also can shoot damaging bubbles out of her flute. Though Travis has become more comfortable with killing female assassins, he merely knocks Kimmy unconscious, proclaiming that he "won't kill a co-ed".

Kimmy Howell, along with several other bosses from No More Heroes 2: Desperate Struggle, appears as an optional boss. She fights roughly the same in as in her last boss fight.

Kimmy Howell is set to return in No More Heroes III, having graduated from college and planning to defeat Travis once more. 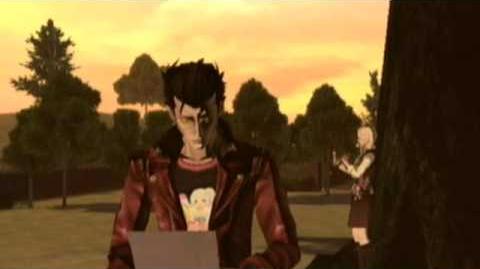 Retrieved from "https://villains.fandom.com/wiki/Kimmy_Howell?oldid=3527031"
Community content is available under CC-BY-SA unless otherwise noted.