Toying and mocking her opponents

Vain Ninja
Kin Tuschi (in Japanese: キン・ツチ, Kin Tsuchi) is a minor antagonist in Naruto. She and her team were sent by Orochimaru to kill Sasuke Uchiha but it was actually to test his abilities.

Kin had very long black hair, almost reaching down to the ground, tied by a violet ribbon right near the end, and black eyes. She wore a forehead protector, a pale green vest somewhat similar to a flak jacket, and snake patterned pants and scarf, much like her teammates Dosu Kinuta and Zaku Abumi.

Like her teammates, Kin appeared to be overconfident in her abilities. She had a dislike towards Sakura due to her seemingly vanity for her hair and criticizes her for focusing on her appearances rather than training. Like her teammate Zaku, she loses focus on her opponent's tactics when overconfident and talking about her abilities. That is seen when she didn't recognize the Shadow Imitation Technique that Shikamaru was using on her while she was talking about her using her Shadow Senbon and Illusion Bell Needles. Kin also appeared to prefer to toy with her opponents by defeating them slowly and painfully as stated by her during her fight with Shikamaru in the preliminaries.

Like many children, Kin Tsuchi was recruited into Orochimaru's organization as a kunoichi of the hidden sound village. She met Dosu Kinuta and Zaku Abumi. She along with her teammates went to participate in the chuunin exams. In the second portion of the exam, the forest of death, her team encountered Team 7 after Orochimaru fought Naruto and Sasuke and gave Sasuke the cursed mark. Their team was after Sasuke. Sakura tried to defend Sasuke and Kin attacked Sakura by grabbing her hair. Sakura broke loose by cutting off her hair. At the same time, other leaf ninjas joined to defend Sakura against them. Ino managed to immobilize Kin with her mind-body-switch jutsu. Sasuke wakes up after recovering from his injuries with his cursed seal of heaven seal activated. Kin witnessed Sasuke brutally defeating her teammate Zaku. Kin along with her teammates retreated.

After passing the second portion of the exam, they advanced to the third portion, the preliminaries. In the sixth round of the preliminaries, Kin faced off against Shikamaru. During the battle, she held the upper hand by messing with Shikamaru's hearing. However, Shikamaru was able to bind her with his shadow jutsu and bend over. As she bend over, she knocked her head against the wall knocking her unconscious.

By the time of the final rounds of the chuunin exams, Kin and Zaku were used as sacrifices by Orochimaru for his Impure World Resurrection technique to revive Hashirama Senju and Tobirama Senju. 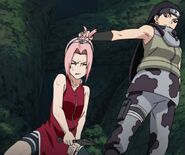 Kin blocks Sakura for the hair 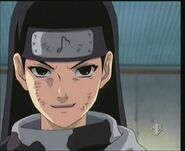 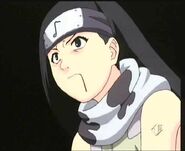 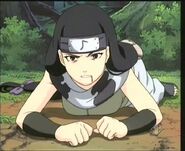 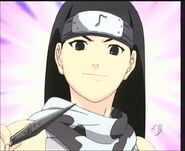 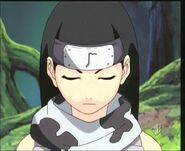 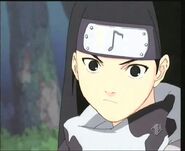 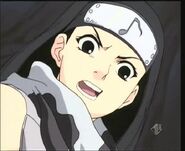