Kinderella, also known as Miss Universe, is a major antagonist in the Wapol's Omnivorous Hurrah from the anime and manga series, One Piece. She is married Wapol to become as a head of his own corporation. After two year ago, she becoming as a queen of Black Drum Kingdom while her husband to becoming as a king.

She was voiced by Yukiyo Fujii.

Kinderella has a long pink dress, a white stripes with each sides, purple sandals, black and purple necklaces, a white long gloves, and since she seems by the crews as her beautiful woman. She has a short pink hair which her seen her mouth is open and black eyes.

As a post-timeskip, she has a purple long dress and her purple sandals like the same version for pre-timeskip. While she become an queen, she has a dark light blue cape has a bat wings in her shoulders, the hooded has the crow design, purple gloves and the eye-mask.

Kinderella is a very rude enjoying for listen to Wapol interesting other people and start laughing when he do, insulting profusely when she how can as he is. She adding with her nicknames "-universe" which suffix on the end in the sentences.

She sometimes adding her laugh: "Koshi koshi koshi", just like with other peoples. 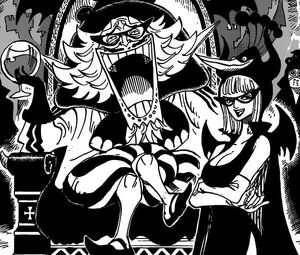 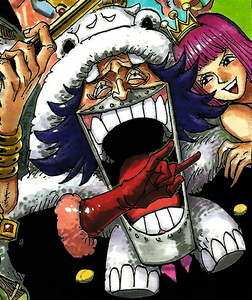 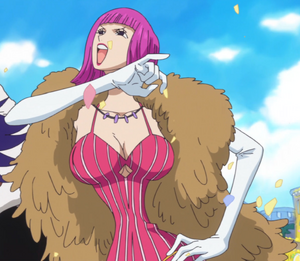 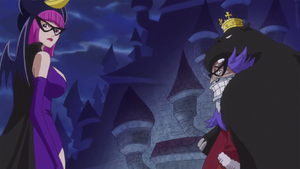 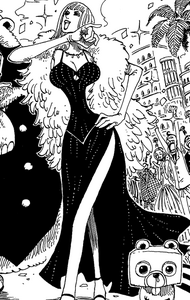 Retrieved from "https://villains.fandom.com/wiki/Kinderella?oldid=4377648"
Community content is available under CC-BY-SA unless otherwise noted.