The Kindred, also known as Franklin-stein's Monster is an antagonist from Sleepy Hollow. It was created by Benjamin Franklin in order to fight the Headless Horseman using a corpse of a martyr and was raised from death by Ichabod and Abbie.

However, it somehow turned evil and became an antagonist turned anti-hero of the Season 3's episode, "Kindred Spirits", after its long-time absence.

It was portrayed by Luke Smith in Season 2 and by Derek Mears in Season 3, the latter of whom also portrayed Jason Voorhees.

With so many manslaughters and horror caused by the Horseman of Death, Franklin came up with an idea to create an invulnerable sentinal weapon to defeat the death. With Katrina Crane and her coven's help, Franklin managed to use a corpse of a deceased soldier to create the Kindred, yet the coven cannot raise it from death due to the lack of a body piece of the Death. Then, Franklin buried the Kindred underground.

As the Horseman began to attack two Witnesses, Ichabod finished the spell and the Kindred awoke, slamming the Death from his horse. As they were fighting, Henry Parrish controlled his Horseman of War armor and arrived at them. As the War was chasing Abbie, the Kindred blocked his attack and saved Abbie from danger. Then, the Kindred ride on a horse and escape, leaving the two Horsemen behind before somehow disappeared into the mist with no trace.

When the Kindred re-emerges and kills three couples and abducts Zoe, Ichabod and Abbie learn that the Kindred is becoming more human and wants a bride. They learn about the Kindress, which was created to have a calming influence on the Kindred. Ichabod recites the incantation to bring the Kindress to life while Sophia, Jenny, and Joe rescue Zoe. With the Kindress now alive, they watch as the Kindred and Kindress leave the area.

Meanwhile, the Hidden One reacts angrily as his supposed asset leaves Sleepy Hollow with the Kindress, and then he destroys them both. 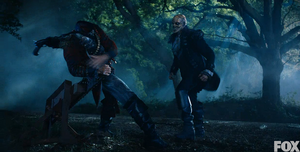 The Kindred battling the Headless Horseman