Proving his dominance, stroking his ego

It is revealed in the film that King and his wolves are a vicious group known as the Rogues, an offshoot of Eastern Pack wolves that broke away from Tony at some point. Not much else is given about them. King has darker fur than a lot of members in his pack, bearing a dark ash gray color. He also has prominent teeth, seen especially when he growls and laughs. Both of these are comparably different than many members of Tony's pack, emphasizing his distance from them.

Alpha and Omega 2: A Howl-iday AdventureEdit

While out, Stinky, Claudette, and Runt examine the place where Humphrey used to go log boarding. Runt climbs a tree to prove himself and sees three unfamiliar wolves approaching, quickly revealed to be members of the Rogues. In the ensuing encounter, the three wolves run off with Runt, bringing him back to their leader King. True to form, King seeks to use Runt as a bargaining chip to gain power. However, his plan also entails using the Rogues to kill every Alpha of both Winston and Tony's unified packs and take over their territory. King also makes it clear that he intends to kill Runt if the time for their ransom runs out or if his parents and pack don't show up.

In the meantime, King has his daughter Princess watch over Runt, which brings out her maternal instincts and makes her protective of the cub. To rescue Runt, Humphrey (standing atop Garth's back and partially hidden in the tall grass) poses as an abnormally large Alpha to distract King and his leading Rogues. When Kate rescues Runt, King orders his Rogues on the attack. However, the Rogues are fought back by the unified Pack members and bears directed by a bear cub Humphrey and Kate helped prior to this confrontation. His Rogues are defeated and sent running, trampling King in the process. King is forced to retreat and calls uselessly for Princess to aid him after she rejects his orders to attack the unified packs' home. What becomes of him afterwards is unknown, but it can be assumed that he and the other Rogues fled beyond their former territory.

King was first seen when he spotted the pups and the critters sliding down the hill and is out for revenge, due to his rogue pack being destroyed following the events in the second movie. With Hench being his only back-up, King charges for the pups, preparing to kill them. Stinky senses them coming closer and they all try to get away across the frozen pond. However, Brent falls through the ice and almost drowns. As the others try to get Brent out of the water, Claudette distracts Hench while King goes after Runt. After a struggle, the pups manage to save Brent and escape.

King and Hench went after the pups, only to be joined by the twins, Lyle and Link, who betrayed their pack and went rogue, due to the lack of food. Stinky senses King and Hench again, this time joined by Lyle and Link, and they all hide in the same cave the two wolves hid. Kate and Humphrey finally come across the caribou they've been looking for, only to be cornered by the grizzlies. The pups enter the bears' cave where Kate and Humphrey were hiding and manage to scare the rogues away, by making it look like the bears are in there.

While this is going on, Kate and Humphrey try to fight the bears, but the two of them get separated by the blizzard. They're reunited shortly after, and Kate distracts the bears while Humphrey goes to find a log on which they can logboard down the mountain. The pups arrive and notice their parents logboarding down the mountain with the three bears close behind. Claudette, Agnes and Runt distract the rogues while Brent and Stinky find a log to do the same thing their parents do. Kate and Humphrey logboard safely down the mountain and escape the grizzlies, while the pups and the critters deal with the rogues. They fly over a passing train, escaping King and reuniting with Kate and Humphrey. As the animals make their way across the valley, Marcel and Paddy arrive. However, Runt's distracted and starts playing in the snow, only to be spotted by King and the rogues who chase after him. Marcel and Paddy knock them, but King continues to chase after Runt. Just as Runt is about to get killed, Kate and Humphrey violently tackle King to the ground. Defeated and all alone, King runs away.

As a leading Rogue, King's primary concern is gaining power for himself and his wolves. This extends to his willingness to abduct a cub to lure his rescuers to their deaths and then kill said cub when his usefulness ends. Despite this though, King seems to legitimately care for his daughter Princess, even if he is willing to use her as a bargaining chip (such as when he was convinced that the "big Alpha" Humphrey wanted her as a mate). He even appears shocked rather than angry when she refuses to follow through with his orders.

King also shows some signs of being a Social Darwinist, a shared philosophy among his Rogues (barring Princess). He insults Runt's size as a sign of impurity and weakness among Winston's pack for permitting an Alpha to marry and mate with an Omega. Throughout, he also preaches about the strength of his Alphas for their "purity" and refusal to permit anyone like Omegas from working within their group. This is also notable by how he fawns over Humphrey's "big Alpha" disguise, claiming it as a powerful and pure wolf. 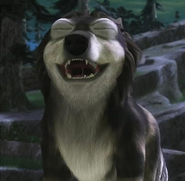 King with two Rogue wolves.
Add a photo to this gallery
Retrieved from "https://villains.fandom.com/wiki/King_(Alpha_and_Omega)?oldid=3585270"
Community content is available under CC-BY-SA unless otherwise noted.