King of the Dark World (determinant)

Drinking from the water bottle in his prison cell

Running on the giant hamster wheel in his prison cell

Prevent the Lightners from closing the Eastern Fountain.

Cover the world in darkness (both failed).

The King is a major antagonist in the 2018 indie video game Deltarune, serving as the main antagonist of Chapter 1 and a minor antagonist in Chapter 2. He is the cruel and heartless ruler of the Dark World and the father of Lancer, who despises the Lightners and will do anything to kill them.

Before the events of the game, the King was one of the four kings who ruled the Dark Kingdom. One day, however, the King meets a mysterious knight and begins to work for them. With the power of that Knight at his side, the King betrayed the other rulers of the Dark World and imprisoned them, turning him into the tyrant of the Dark World. Afterward, the Knight uses their power to create a second Dark Fountain and tasked the King with protecting it.

When the King heard that the Lightners are heading to the Card Castle to close the fountain, he sends his son, Lancer, to dispose of them. Unfortunately for the King, however, this plan backfired as Lancer started to grew a bond with the Lightners, particularly with Susie due to their similarity.

As the heroes get closer to the castle, however, Lancer starts to become more nervous at the thought of the heroes fighting his dad. When the heroes eventually reach the castle, Lancer betrays them and throws them in the dungeon forever, so that they would not have to fight his father.

Susie manages to escape and attempts to find a way to free Kris and Ralsei. On her way, however, she meets up with Lancer, who attempted to stop Susie, resulting in the two to fight. Susie, however, can not bring herself to kill Lancer and begs him to move aside, at which Lancer reveals his concern that the heroes and the King will end up killing each other. Susie then promises Lancer that she won't kill the King and they'll try to talk it out. Relieved, Lancer goes ahead to try and reason with his father while Susie rescues the rest of the party.

When the King noticed the heroes' presence, he picked up his son and threatened to throw him off the roof if the Lightners refuse to bow to him. Lancer, however, manages to attack his father from behind, causing the King to drop Lancer and giving him a chance to escape. The heroes then proceed to fight King.

The heroes attempted to reason with the King, but he refused to listen, forcing them to stop him by force. When the King either receives enough damage or becomes tired from the heroes holding out against his attacks, he calls off the fight, exhausted, and claims to wish for a peaceful solution, convincing the heroes to put down their weapons and Ralsei to heal him.

When Ralsei does heal the King, however, he attacks the heroes, knocking them out. The King then attempts to murder Kris, saying that quiet people "piss him off". Before the King can land the finishing blow, however, he is interrupted by Susie, who also said the exact thing to Kris the first time they meet.

Depending on the route the player is doing, the fight will end in one of two ways.

Ralsei will use the opportunity to cast his Pacify spell on the King, putting him into a deep sleep.

Susie will distract the King long enough for Lancer to show up, who had gathered the minions that King mistreated during the fight. Lancer will then announce that he's overthrowing his father, and promptly throws his father into the dungeon.

King appears again as a minor character in Chapter 2. He is imprisoned in a prison cell by Lancer and/or Ralsei and sits in his cell. It is revealed he actually was not going to kill Lancer, he just threatened his death in order to bluff the heroes, which worked far more effectively than it should've according to him. It is also revealed that even if he did drop Lancer, he believed his son would just bounce off the floor anyways. When asked about his water bottle, he begins gloating about it while chugging it.

After Queen is defeated, she visits her possible-husband in the cell, claiming that she's taking care of Lancer now. She also says she has a much better water jug in her mansion. King tells Queen that if Lancer ever cries, just bounce him like a little ball, which usually calms him down.

King is a big and bulky figure. Half of his face is covered with a spade, covering his eyes. He has big, sharp teeth and, like his son, tends to hang his blue tongue out. In the middle of his stomach, there is a big mouth where a chain with the shape of a heart comes out, which King uses during his battle. He wears a black cape, blue boots and gloves, and a spiky crown on his head.

King is a brutal, abusive, power-hungry, and heartless ruler. He is known for constantly mistreating and abusing his servants, and shows little to no concern over them, either firing them or outright throwing them into the dungeon. In addition, he is an abusive father towards Lancer as well. Rouxls Kaard mentions that King often neglects Lancer and, at times, forgets to feed him. He even threatens to throw Lancer off the roof, showing he has little to no concern for his son whatsoever. This could be because of what the Knight has done to him, resulting in his transformation into the evil person that he is to this day.

It is revealed however that King's reglect and abuse of Lancer is completely a bluff to make himself look more intimidating, as King actually cares about Lancer, and states that even if he did drop him, he'd simply bounce back up without any problem. 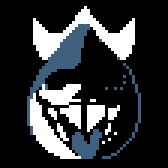 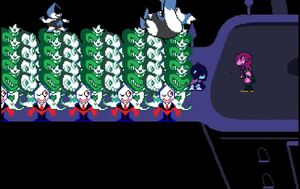 King's defeat as he's overthrown by his own son.

The King throwing his chain. 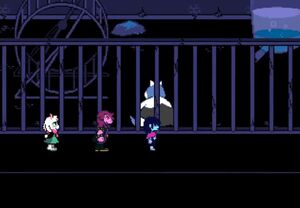 King sulking in his cell in Chapter 2. 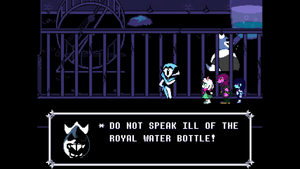 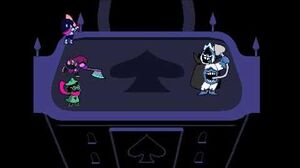 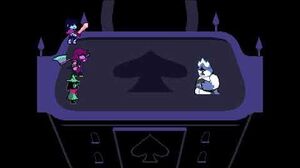 Deltarune King Boss Both Endings (Overthrow Pacify)
Both of the possible endings to King's boss fight.