Leader of the Checkmate Four

The Bat Fangire is the original King of the Checkmate Four and the main antagonist of Kamen Rider Kiva. He is the lord of all Fangires, the first Kamen Rider Dark Kiva and the original Kiva who was a threat to humanity in his time. His true name is The Dawn Sleeps, A Magnificent Story's Ending. He is from the Beast Class of the Fangire subclasses.

He was portrayed by Shinya Niiro.

The Bat Fangire is the lord of all Fangires and the original Kiva who was a threat to humanity in his time. Despite being married to the previous Queen of the Checkmate Four, Maya, he has no actual love for her as her purpose to him was the birth of his son, Taiga Nobori.

When the King returns from afar to check up on his mate and son, he is angered to learn from Bishop that Maya has been meeting with Otoya, a human who has been using the Ixa System to slaughter their race, sparing her as the action of killing her would prove that he loved her and letting her be the one to kill the human. He later goes after Jiro to finish what the Rook started: the extermination of the Wolfen Race, along with putting an end to the last of Merman and Franken races as well. However, he eventually offers the three a chance to avoid extermination, provided they kill Otoya for him.

The three are unable to do it, choosing to flee town instead. Riki and Ramon were unable to escape the King, who seals them into the Dogga Hammer and the Basshaa Magnum respectively so they can serve as decorations within Castle Doran. He is heartbroken and enraged when Maya reciprocates Otoya's love for her, preparing to kill them when Jiro intervenes and finds himself sealed into the Garulu Saber. After capturing Otoya, the King forcibly takes him to Castle Doran, using his life energy to feed the monstrous beast. As a final request, the King allows Otoya to play his violin one last time before he died, but Maya interferes and fights her consort while Yuri escapes with Otoya.

Maya is ultimately stripped of her title and Fangire powers as a result, with the King later forcing her to never see Otoya again by using Taiga's well-being to enforce it. When Kivat-bat the 2nd witnesses Wataru Kurenai, Otoya's son from 22 years into the future, transform into Kiva, both this and his partner's cruel methods ultimately lead to the King losing Kivat the 2nd to Otoya, resulting in the final confrontation between the two. After the battle, the King is ultimately killed indirectly by the hand of his own son when he tried to kill him and Maya.

In 2008, the Bat Fangire is resurrected by Bishop in a berserker state to kill both Taiga and Wataru. In the battle between the two Riders the revived King, King is killed by the half-brothers together.

A resurrected Bat Fangire, in the same berserker state seen when he was resurrected previously, is seen among Dai-Shocker's common troops. He is among the monsters faced by Diend and Decade when they decide to take on Dai-Shocker by themselves, and attempts to attack Diend, only to be thrown away by the Rider. When the All Riders force arrives, the berserker Bat Fangire attempts to face Decade, only to be slashed and retreat. He's seen for the last time among a force of Shocker Combatmen, Fangires and Orphnochs facing Kamen Rider Faiz and Kamen Rider Kiva. He's presumably defeated by them, as both Kiva and Faiz are later seen joining up with other Riders, like Decade to defeat Ikadevil.

The Bat Fangire, revived again and back to his original Fangire form while armed with a sword, appears as one of the Great Commanders of the revived Dai-Shocker. Following the orders of Doktor G, Dai-Shocker's second in command, he engages GokaiYellow in combat and they are evenly matched. When Dai-Shocker and Dai-Zangyack reveal their alliance and fight against the combined Super Sentai and Kamen Rider force, the Bat Fangire, alongside Yogoshimacritein Crime Minister of the Gaiark, is seen leading a group of Fangires, Gaiark and also the Medusa Legendorga and the Samurai World Yoma Rairaiken to fight against the Go-Ongers and Kamen Rider Kiva. However, they're all destroyed again at once by a combined finisher attack from the Go-Ongers and Kiva. Before his defeat, he was seen earlier fighting Clover King of JAKQ and DekaRed.

The Bat Fangire appears revived as one of the members of Space Shocker.

The Bat Fangire Reborn appears as a boss character in the video game Kamen Rider Battride Wars. He acts as the boss for Kiva's mission "Wake Up: Kiva's Memories", which loosely recreates the final episode of Kamen Rider Kiva. 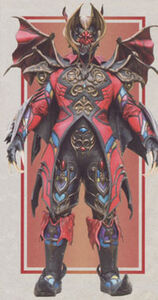 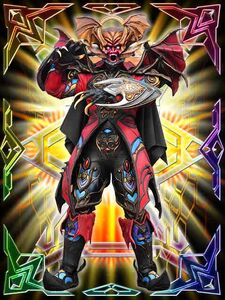