Absorb the powers of all the Core Medals and become a god to conquer the world.

He is also an ancestor to Kousei Kougami and the predecessor of Eiji Hino as Kamen Rider OOO, being the very first one who took on this title. His origin story was explained in the first part of Kamen Rider OOO prequel novel, where the King serves as its main antagonist.

While he's dead long before the series starts, he's the cause of everything that's happened in the series because he had the Greeed and OOO created out of his own selfish desire to become a God. As a result, he is the overarching antagonist of Kamen Rider OOO as a whole.

He was portrayed by Shu Watanabe in Final Stage: Putotyra Combo.

The first Kamen Rider OOO was a king of a lost European kingdom 800 years ago, when the Greeed and OOO were created. He created the Greeed and the OOO Driver in order to absorb their power and become a god. He teamed up with Ankh to defeat the other Greeed, but ended up literally backstabbing him, only to die from being unable to contain all the power he absorbed, transforming him into the stone sarcophagus the Greeed were sealed in.

The prequel novel by Nobuhiro Mouri expands on his actions and shows that he cloned himself to attack neighboring countries; burned down villages that opposed him; invaded enemy camps using subterfuge; and used earthquakes and tsunamis to wipe out the Spanish Armada. After Ankh betrays the other Greeed by working with him, he double-crosses Ankh and stabs him in the back for his Core Medals and causes all the Greeed to be sealed away just so he could have the medals for himself.

After betraying Ankh, the King scanned all thirty Core Medal types at once in an attempt to gain their power through the OOO Scanner, which he thought could fulfill his desire to become a living god. However, this became his undoing. The power was too great for him to handle and the First OOO turned into the stone coffin, and the four Greeed: Uva, Kazari, Gamel, Mezool, along with Ankh's right forearm became sealed in. The OOO Driver, the very thing that the greedy king sought to gain power from, became the lock of the coffin itself.

After meeting his successor, the King assumes the form of OOO PuToTyra Combo to gain the trust of Eiji, and reveals his true identity after gathering other Greeed. He battles Eiji in his Greeed form and gains an advantage until Ankh grabs the medals from him and the other Greeed. In the end, Eiji releases all the other OOO from the seal, and they fought together and defeated the King, ending his reign of terror once and for all.

A painting of the King. 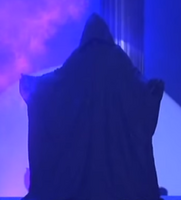