Father (by Andrias)
The Core
Darcy

Member of The Core's hive mind

Make his son follow their ancestor's way of conquering.

Reclaim the Calamity Box.
Help the Core in its goals.
Keep Marcy as the Core's host forever (all temporarily succeeded).
Conquer the multiverse (failed).

King Aldrich Leviathan is a pivotal antagonist in the Disney Channel series, Amphibia.

He is the late father of King Andrias and the previous ruler of Amphibia, who wanted his son to continue their family's legacy of multiverse conquest. He is also the main reason for Andrias becoming a bitter tyrant after Leif's "betrayal", and is also one of the many past rulers uploaded into the Core.

1,000 years before the series began, King Aldrich was on the throne, continuing the Newtopia Royal Family's multiversal conquest.

One day, Aldrich showed his son, Andrias, the Core, a bio-mechanical being made from the smartest minds in Amphibia's history. He then gave his son the key to the Calamity Box so Andrias could invade the Earth. However, Andrias not only disagreed with his father's extremist ways to sustain Newtopia's image but also wasn't ready to leave behind Leif and Barrel - his best friends, despite Aldrich thinking that they would betray him.

On the next day, Leif revealed that after Andrias showed them the Calamity Box, she received a vision of Amphibia's destruction, caused by their invasions, after touching the gems, so she tried to convince the King to stop conquering worlds, finally seeing the consequences of this. However, Aldrich refused to listen, so Leif stole the Box, but did this regretfully, since she knew Andrias was already under his father's pressure, and stealing the Box scarred Andrias forever since it's likely she "backstabbed" him.

Soon after Leif's disappearance, Aldrich revealed that the box will return and instructed his son to be ready for that moment. Sometime later, Aldrich uploaded his mind into the Core to sustain himself, and years later (via Darcy), congratulated Andrias for discarding his friendship with Leif and Barrel while he is getting ready to conquer Earth.

When Marcy Wu's body was being controlled by the Core, Aldrich's consciousness served as the guardian of Marcy's fantasy inside the Core's matrix, as a way to distract her. However, when Marcy realized she was trapped in a fantasy, Aldrich planned to completely erase her personality. However, before he can do that, Sasha Waybright frees Marcy from the Core, saving her in the process.

In the series finale, as the Core becomes part of Amphibia's moon and tries to annihilate all life by colliding it with the planet's surface, Aldrich asks his son Andrias for help. However, his son refuses, sending his army to fight against the Core, claiming he's doing what he should've done a long time ago; standing up to his father. Ultimately, Anne Boonchuy manages to destroy the Core once and for all, which killed Aldrich in the process.

From what little is seen of Aldrich, he appeared to be a controlling tyrant who manipulated his son Andrias to do what he wants, used his insecurities against him, and showed little warmth or care towards him. He was also genocidal, as he wished to exterminate humans for their resources on Earth. Aldrich was also xenophobic and classist, calling the Olms cowardly and judging Leif for being a farmer.

Ultimately, he played a very big part in shaping Andrias into the tyrant he would become by the present day since it was because of the ideas he planted in his head that he came to believe that Leif betrayed him out of malice, that their way of life becoming endangered was his fault, and of course, became very bitter towards the idea of friendship and essentially closed his heart off from the world.

Even after he joined the Core, his conscience was very much present from within it and played a big part in helping the Core's overall conscience keep a strong grip on him since above all else, Andrias wanted to make him proud and "redeem himself" for his mistake, which largely thanks to his gaslighting and manipulation, he felt he could only do by helping restore their former glory, as well as resume their conquest of Earth and other worlds like they originally planned, making him indirectly responsible for many of the atrocities he committed along the way to meet that goal.

That said, he can also be very good at putting on a kind façade when it's beneficial to do so, as shown by how he acts towards Marcy when he's put in charge of looking after her while she's trapped in a part of her own mind. Among other things, he gives her access to a huge library and introduces versions of Anne and Sasha that are completely willing to go along with whatever she likes. However, this was all just to distract her at best, and to trick her into joining the Core at worst. Once she sees through it all and realizes it's not real, he quickly drops the act, speaks in a disparaging way towards the same interests and friends he had just kindly been offering her, and tries to force her to join the Core.

When she refuses, he quickly strips everything away and leaves her in a void of darkness, something that would eventually erase what was left of her personality, according to him. Aldrich is also a coward at heart, as he instantly panics when Andrias begins crushing him. 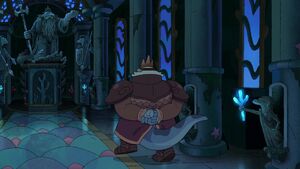 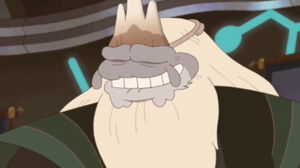 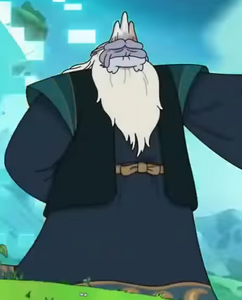 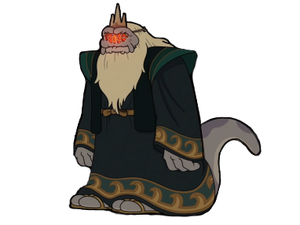