The History of the Kings of Britain

Unify all of Britain.

Conquer all of Rome.

King Arthur is usually portrayed as the ideal king who brought prosperity and peace to Britain, and was originally seen as a warrior who defeated the Anglo-Saxons at Mount Badon due to god being on his side (most likely for being pious), but was later demonize by some subsequent authors.

In Geoffery of Monmouth's History of the Kings of Britain, he's portrayed as a fierce warrior who clashed with Roman Emperor Lucius Tiberius over tribute and whose wars disenchanted his people leading them to follow Medraut (Mordred). However, Geoffrey of Monmouth's Arthur was initially a beloved king due to his generosity and valor. Indeed, Geoffrey of Monmouth saw Arthur as the ideal king.

In Sir Thomas Malory's Le Morte d'Arthur Arthur committed two chief sins. He unknowingly slept with his half-sister Morgause (Morgan le Fay in other accounts) because he did not know of his true parentage. Only after the deed was done did he discover she was his half-sister. She bore an illegitimate son named Mordred. But once again, like Geoffrey Of Monmouth, Malory considered Arthur a great king.

When Merlin gave him a prophecy that a May-born male baby would grow up to usurp him, Arthur rounded up all the babies born in May, and put them on a rickety ship and sent them all out to sea. There all of them drowned, save for one, Mordred who grew up to be his enemy. Though, Malory depicted Mordred in an unflattering light, making him eventually evil and unsympathetic.

After the affair between Lancelot and Guinevere was revealed, Arthur sentenced his wife, Guinevere to burn for treason even when many of his Knights objected to such cruelty. Fortunately, Lancelot saved Guinevere, but Arthur went to war against the war against his former friend. He was usurped by Mordred while fighting Lancelot in France, but he sought to regain his throne He was met his end at the Battle of Camlann. He struck Mordred through with his spear Ron and was mortally wounded by Mordred's final blow.

The actual negative portrayal of Arthur is from The Lives of Welsh Saints, the French prose cycles, and national propaganda such as the Scottish chronicles.

In the Lives ( which is too late to be considered a reliable account of Arthur), Arthur became a tyrant and the enemy of the church. In stark contrast to earlier sources, where Arthur was clearly seen as Christian, and, at times, even as an agent of God who God was supporting (Historia Brittonum). This seems to do with the purpose of the Lives, which was meant to promote historical welsh saints, with Arthur, a popular and influential figure in Wales at the time, being conveniently used for propaganda.

While the negative portray of Arthur in the French prose cycles was based on much of the Arthur of the Lives. The French prose cycles was Cistercian propaganda, where Arthur and the other English heroes were drastically altered (in comparison to their portrayal in the chronicles and earlier romances), being made ignoble and immoral. Arthur was usually depicted in an unflattering light to justify Lancelot and Guinevere's and adultery and tracheary, but also to make the other French heroes look good.

While in the Scottish national propaganda, Mordred was made into the hero who was rightfully taking his throne from his tyrannical uncle. Due to the Scottish fearing the English would conquer them, and their war with them. This also seems to apply to the French and others. In the medieval ages and renaissance era, Arthur was sometimes made into the villain due to national propaganda, usually because this country was fighting England, if not disapproved of their current king or the country as a whole. 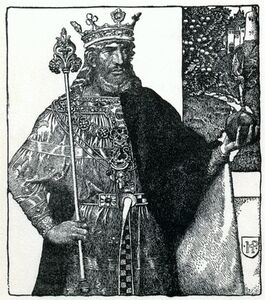 King Arthur, as depicted in Monmouth and Mallory's works

King Arthur, the warmongering king of Britain
Add a photo to this gallery

Retrieved from "https://villains.fandom.com/wiki/King_Arthur_(mythology)?oldid=4168280"
Community content is available under CC-BY-SA unless otherwise noted.