Avenge the extinction of his species.

Feed on the darkness in human hearts.

King Bibi is the main antagonist of Come Back! Tensou Sentai Goseiger: Last Epic - The Gosei Angels are National Icons!?

King Bibi is the last remaining Bibi Bug out of the Bibi Bug hive. After the Bibi bugs were seemingly killed of one last remaining Bibi Bug evolved into a human form known as King Bibi. Its main goal was to get revenge for the fall of its species and it planned to do it and succeeded by possessing Yumeko Hoshino who he possessed through a fountain and through her depression. Since she was a failed movie star who had a failed career due to a scandal. Using her he would plan to destroy the Goseigers an everything they stood for by feeding on the darkness within human hearts. Using her he posed as an assistant in Sakai Enterprises in which he takes up the Goseigers once they reveal themselves to the world with their defeat to make people forget themselves with their Invocations. He was destroyed with Ground Gosei Great. 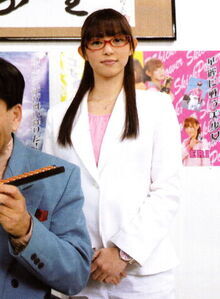 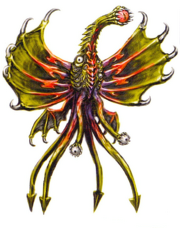 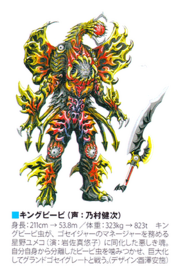