King of the Bob-ombs

High-ranking member of the Koopa Troop

Aid Bowser in taking over the Mushroom Kingdom.

King Bob-omb, sometimes called Bob-omb King or Big Bob-omb, is the king of the Bob-ombs and a recurring antagonist of the Super Mario franchise. He is the first boss who is fought in Super Mario 64 and Super Mario 64 DS. Guarding the Power Star, which Bowser entrusted him with, he will not give it up without a fight.

In Super Mario 64, King Bob-omb is encountered at the top of the mountain on the Bob-omb Battlefield. He and his species of the regular black-colored Bob-ombs have engaged in battle with the local Bob-omb Buddies, who are pink and peaceful by nature. If Mario speaks to various Bob-omb Buddies, they will tell him that the area has become a battlefield ever since King Bob-omb was entrusted with a Power Star by Bowser and that he can find him at the top of the mountain.

Upon scaling to the top of the mountain, King Bob-omb challenges Mario to a duel and agrees to relinquish the Power Star should Mario defeat him in battle. To do so, Mario merely has to run around to the back of him, pick him up and toss him three times while avoiding his hands in order to not be tossed a considerable distance. If he is thrown off the mountain, he will accuse Mario of cheating and he will have to start over (even though it is possible for Big Bob-omb to throw Mario off the mountain himself). After defeating him, the Bob-omb Buddy at the beginning of the level will express gratitude and note that the Big Bob-omb is now "just a big dud," in other words, defeated.

In Super Mario 64 DS, he is fought twice. The first time is as Yoshi, and instead of picking him up, Yoshi had to grab the Bob-ombs thrown at him with his tongue and spit them back at him before they explode in Yoshi's mouth. After being hit by three Bob-ombs, he is defeated. The second time, he can only be defeated by one of the three plumbers by utilizing the same strategy used in Super Mario 64.

King Bob-omb appears as a boss in Mission Mode of Mario Kart DS. He is the boss of the fifth level and fought against Wario.

King Bob-omb makes his RPG debut in Mario & Luigi: Paper Jam as the boss of Mount Brrr, in charge of the paper terrain operation under orders from Bowser. When the Mario Bros. discover his plans, he threatens to blow up. If he is not defeated under four minutes, he explodes causing massive damage, potentially enough to kill all party members and cause a game over. Countering his bomb attacks at the right time can cause the timer to malfunction and set it back by a minute, much to King Bob-omb's shock. After his defeat, King Bob-omb boasts about how he cannot be defeated due to his stylish mustache, but then comments that the Mario Bros. also have mustaches.

In Bowser Jr.'s Journey, King Bob-omb appears as the boss of the level "The Power of Junior", where he is the last obstacle of Captain Goomba testing Bowser Jr.'s team. He is a ranged unit and his special is Rain of Pain. He must be defeated in less than ninety seconds or he will explode, which will KO all allies.

He does not appear again until the post-game level "A Mighty Melee", serving as the enemy captain of the first and third round. His skills cannot be denied. He is alone on the first round and has the same abilities, but must be defeated in less than thirty seconds. In the third round, he is again the captain with Broque Madame as his first officer. He must be defeated in less than ninety seconds.

King Bob-omb appears as an unlockable assistant, only available from battle boxes tier three and above from versus mode. His stage mode ability grants a thirty (eighty at level five) percent chance to eliminate two viruses at the start of the stage. His versus mode ability gives the player a four (twenty at level five) percent chance of sending an extra row of viruses at the opponent.

King Bob-omb appears in Mario Golf: Toadstool Tour on the eighth hole of the Peach's Castle Grounds course. Hitting him will make him flee from the course. In Mario Golf: World Tour, King Bob-omb is only referenced as one of the random names on a tournament scoreboard.

He makes his first playable role in the series in Mario Golf: Super Rush. He has high stamina and power, but poor speed. His special shot is "Bob-ombs Away" and his special dash is "Kaboom Dash".

King Bob-omb also appears in many other Super Mario games, including the Mario Party series as a reoccurring board hazard or a boss minigame.

King Bob-omb appears as a trophy in Super Smash Bros. for Nintendo 3DS and a spirit in Super Smash Bros. Ultimate. For the latter case, he is an advanced class primary attack type with his ability increasing the power of grabs and tosses. He can be obtained by summoning him with the cores of a Bob-omb and the Shake King, or by defeating him in a spirit battle against a giant Kirby on Peach's Castle that throws Bob-ombs at the player. 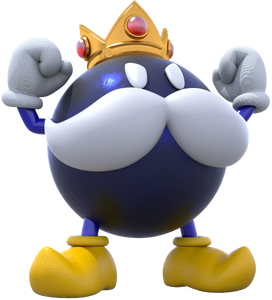 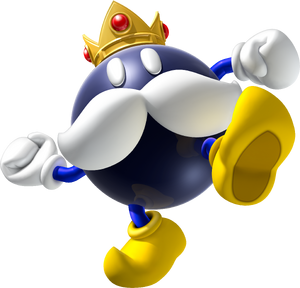 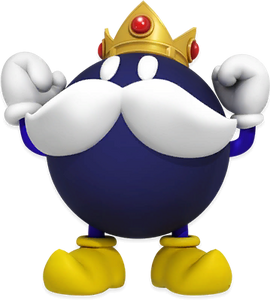 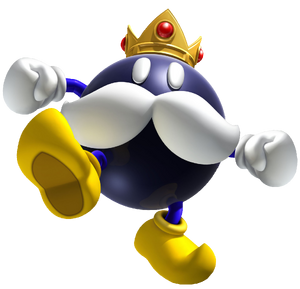