King Bohan is the secondary antagonist of the videogame Heavenly Sword and the main antagonist of PlayStation's 1st full-length animated feature film with the same name.

King Bohan in the game is voiced by Andy Serkis, known well for his role as Gollum in The Lord of the Rings trilogy, in the movie he is voiced by Alfred Molina.

Bohan is first referenced in the third part of the Animation Series, The Rise of Evil. Giving a brief overview of his life before the events of the game, it reveals that Bohan and Shen trained together during Bohan's younger days as the crown prince of his father's kingdom. However, the short film goes on to describe Bohan as a greedy, lazy, power-hungry man driven by lust for the throne. After being humiliated by Shen in a sparring match in the castle training yards (during which time Bohan is blinded in one eye after he attempted to kill Shen for embarrassing him by stabbing him with a concealed dagger), Bohan retreats to his room, where he is seen lamenting on his situation as well as contemplating his future. It is during this time that we see the Raven Lord appear in his life. After once again being humiliated, this time at the hands of his father after being caught wearing his father's crown, Bohan conspires to commit patricide and take his father's place as king, likely due to the insistence of the Raven Lord. Bohan is successful in this endeavor, achieving his goal by poisoning his father's wine goblet. However, due to his own ambitions, Bohan would be unsatisfied, instead wanting not only to be a king, but to be a living god as well, like figures such as the Heavenly Warrior himself.

After successfully gaining control of his father's kingdom, Bohan would go on to build one of the largest empires the world had seen, rivaled only in sheer size by that of the Raven King's holdings themselves. Bohan would also conquer various territories in a manner similar to the Raven King; using his skill as a tactician, coupled with superior numbers, he would use his armies to vastly overwhelm the inferior clans and tribes he came across in his travels. In a perhaps sick display of martial pride, Bohan would then go on to murder the clan leader themself, before taking the most prized possession of said clan and displaying it, alongside the decomposing body of the slain chieftain, in a trophy room in within the armory wing of his castle. It is most likely during this time that Bohan meets his major generals, Whiptail and Flying Fox, and elevated them to status of general within his army, forming an inner circle of sorts alongside the Raven King. It is also during this time that Bohan met Roach's mother, who bore him Roach; however, as she is not seen or referenced in the game, it is possible she either died during childbirth or was simply a quick fling by Bohan with unintended consequences.

By the time Heavenly Sword takes place, Bohan has conquered numerous clans and absorbed them into his vast empire, enlisting the men of the conquered peoples as soldiers in his army. He is looking to conquer Nariko's clan and add them as well. However, an even greater purpose drives Bohan to defeat this clan: the clan are the keepers of the legendary Heavenly Sword, which said to grant the user unimaginable power while slowly draining their life force. Bohan decides that he must have this sword for himself, and sets out on a campaign to crush this clan and take the Sword for his keeping. However, this clan, lead by Shen, Nariko's father, is determined to prevent this from happening. The result of his defiance is a chase by Bohan's armies of Shen's clan, which culminates with the clan barricading themselves within a snowy mountain fortress. Throughout Heavenly Sword, Bohan reappears as an indirect antagonist, insulting Nariko and affecting her by harming those close to her but never facing her himself. He makes an appearance in every chapter, with the exception of Four, during the game, and players finally get to battle him in Chapter Six, in which he assumes the character of the demonic Raven King. He is defeated by Nariko after the duel takes the pair to the heavens and back, upon which he is taken home by Roach after being abandoned by the Raven King to die at the hands of Nariko.

Ruthless, cunning, and ambitious, King Bohan's sole goal in Heavenly Sword is the possession of the sword of the same name. He is willing to stop at nothing to achieve this goal, sending hundreds of thousands of his soldiers to their deaths in order to claim it. Bohan has no qualms about relationships, either; he kills one of his highest-ranking generals, Whiptail, in order to retrieve the Sword at the end of Chapter Two. He is shown to be generally cold and unforgiving towards people, even ones that genuinely care for him. This is shown in Chapter Three, when he chastises Roach for calling him, "Daddy". However, this attitude seems to have changed by the end of Chapter Six, when he refers to Roach as "my son". Although this may be a result of his defeat at the hands of Nariko and the abandonment of the Raven King.

Bohan's abilities in combat are questionable, at best. During his final battle with Nariko, the Raven King has entered Bohan's body and imbued him with powers exceeding his own, leaving much to be desired in terms of Bohan's combat skill. He appears to possess a large amount of skill as a politician and military strategist, however. He was able conquer all native clans (until Nariko's) in his search for worldly treasures and political power. He also was able to absorb these peoples into his massive army, as the main demographic of his military resembles that of Nariko and her tribesmen. In the end, though, it was all for nought, as by the time of the end of the game, most of Bohan's military lies destroyed by Nariko.

Bohan receives limited feature throughout Heavenly Sword's storyline until Chapters Five and Six, during which he is featured prominently. He is especially important in Chapter Six, as he is the main enemy to be fought in three of the Chapter's four scenes. He is by far the toughest enemy in the game, being aided by the Raven King's immense power. Despite this, Bohan is defeated by a resurrected Nariko, who returns from death a goddess after striking a deal with the Sword. The subsequent battle between them is reminiscent of the fight between the Raven King and the Heavenly Warrior at the beginning of time(according to in-game lore). Following his loss, Bohan begs for the King's assistance, to no avail; the demon leaves him blinded and helpless at the mercy of Nariko, whose intention is to slay the defenseless monarch. However, he is saved by Roach, who implores Nariko to let him take Bohan home and leave her tribe in peace, to which, after pondering the decision, she agrees. In his final scene in the game, he finally refers to Roach as his son, either out of true compassion or gratitude for his life being spared. 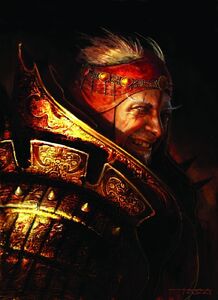 Retrieved from "https://villains.fandom.com/wiki/King_Bohan?oldid=4126532"
Community content is available under CC-BY-SA unless otherwise noted.