King Bulblin is a major antagonist in The Legend of Zelda: Twilight Princess. He is the king of the Bulblins.

He is first encountered in Ordon Woods, when his henchmen knock Link out and kidnap Ilia and Colin, after which the king summons a Twilight Portal by blowing his horn and fleeing the scene with both Ilia and Colin in tow (Beth, Talo, and Malo are also taken, though their abductions occurred offscreen). Later, in Kakariko Village, King Bulblin and his minions kidnap Colin again, and Link pursues them on Epona. He eventually engages King Bulblin in a jousting match on the Bridge of Eldin. Link wins, and King Bulblin is knocked off his mount and apparently falls to his doom off the bridge.

However, he is later revealed to have somehow survived. Soon after, he battles Link again, this time on the Great Bridge of Hylia, while Link acts as an escort to Ilia, Telma, and the sick Zora, Prince Ralis. This time, he has equipped himself with shields to protect against Link's sword. This proved to make little difference, however, as Link uses his newfound Bow to land a couple of hits on him, defeating him and knocking him off the bridge. He leaves behind a key he was carrying that allows Link to unlock a couple of gates on the route beyond the bridge, including the one just outside Kakariko Village.

When Link infiltrates the Bulblin Camp, he encounters King Bulblin in a small, empty square surrounded by constructions, this time in close combat, only this time the gargantuan Bulblin is equipped with a giant axe. After King Bulblin is defeated once more, he limps away, only to set fire to camp moments before departure. Fortunately, Link manages to escape by ramming a Bullbo through a flimsy wooden wall blocking his exit.

In the courtyards of Hyrule, Link encounters the King Bulblin for the final time. Before the fight, King Bulblin says: "I have come to play!" The king is defeated once more, but this time, realizing that it is hopeless to attempt to kill Link, he surrenders the Small Key he has on his person. He leaves, telling Link and Midna that all he had ever known was to serve the strongest side, acknowledging Link as superior to Ganondorf. This surprises Link and Midna, as Bulblins were thought to lack vocal abilities, aside from grunting. He appears one final time riding around Hyrule Field with his troop of Bulblins during the end credits.

King Bulblin appears on several missions on the Twilight Map in the Adventure Mode. He resembles a Bulblin Captain, but is larger and has more health. Powered up with morale, he can be weakened by defeating his Bulblin minions. If his health is depleted by a third while still powered, King Bulblin will acknowledge the player's strength and join their army.

King Bulblin also appears as both a sticker and a trophy in Super Smash Bros. Brawl. On both, he is mounted atop Lord Bullbo. His sticker increases any player's leg attacks.

In Super Smash Bros. Ultimate, King Bulblin also appears as a primary attack-type spirit. His spirit battle is against Wario on the Bridge of Eldin, who favors dash attacks. 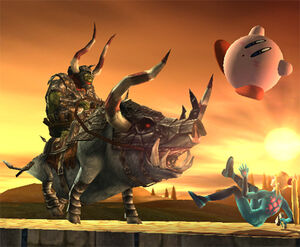