King of the Cave

Leader of the enemy tribe (formerly)

King of the Cavemen

King Chichak, simply known as Chichak, is the main antagonist in the 2008 animated film Turok: Son of Stone. He is Turok's arch-nemesis, the former leader of the enemy tribe, and the tyrannical king of the Cavemen.

King Chickak is known for being very menacing and competitive to Turok, Catori, and Andar. He is extremely cruel, arrogant, manipulative, and traitorous in every nature. He also has a fondness for using his torches to fire the teepees. Furthermore, he is a compassionate king to his primitive race of Cavemen. He is also shown to be very resentful, malicious, tyrannical, and destructive. One of his most reprehensible and unpleasant plans is when he sends his Cavemen to pillage the village.

16 years later, Nashoba and Catori's son, Andar, finds Turok. Andar reveals that Nashoba survived the wounds from Turok's attack and has become Chief of the tribe. Andar requests that Turok return to the tribe to fend off an enemy attack that could wipe out the tribe. It is revealed that by Turok killing the enemy tribesman years before, it has sparked a war between the two tribes (though the enemy attempted to kill him and his brother and then kidnap Catori). Turok at first declines to help. During the attack, the leader of the enemy tribe, Chichak injures Nashoba. Almost all the warriors are killed in the battle with Chichak's men, giving no protection to the tribe's women and children. Soon after the battle Turok comes to the battleground to find a dying Nashoba who which he swears he'll protect the tribe.

Turok and Andar arrive to find Chichak's men destroying the village. It is revealed that Chichak is the son of the leader of the men that Turok killed years before. Chichak takes Catori hostage and flees from the village with Turok and Andar following.

After fleeing, Chichak arrives in a cave full of bones where a standoff takes place between the trio. Soon after a Terror Bird leaps out and kills one of the horses by beheading her. Chichak flees with Catori further into the cave with Turok and Andar wounding the Terror Bird, which possibly died later.  Turok and Andar find an opening in the cave that leads them to the Lost Lands.

When Andar hears footsteps, he assumes there belong to herds of buffalo, but when he gets up there weren't any buffalo, but a herd of grazing Ankylosaurus. After running away from the stampeding herd of Ankylosaurus, Turok finds a Carnotaurus attacking Chichak and Catori. Turok and Andar rescue Catori and eventually escape from both Chichak and the Carnotaurus by floating on a log down a river. Meanwhile, Chichak arrives to present a primitive group of Cavemen and is attacked by them.

After Chichak kills the Cavemen king, he becomes the new king of the group, having asserted his authoritative dominance. Back at Turok's group, Sepinta is informed by Aniwa that they found strangers. The group is escorted to the village by Koba who informs Sepinta that he saw Turok killing a Plesiosaurus. Sepinta reveals that she is the Chief of the Cliff People. Turok tells Sepinta their story of how they got to the Lost Lands, to which Sepinta does not believe.

Later that night in the cave, Chichak was sitting on his stony throne. A Cavewoman is seen feeding her children's meat, but one of them begins to fight over the one that took it. He refuses after his horse was killed and assumed by another Cavewoman, who offers Chichak some meat. The Cavewoman begins to grunt to have him eat it, while three Cavemen watch her. When Chichak finally takes it, he takes a strip of it and finds it to not be bad before continuing to eat. The meat he is eating reveals that it is the Caveman king.

As Chichak finishes his meat, he orders all of the Cave people to listen to him. He tells them that he is looking for others like him, but they don't seem to get it. One Caveman tells him sit down, but Chichak doesn't want to stay with them, but to find his enemy. Chichak immediately shoots his head after the Caveman tries to calm down, then he was shocking the others. Chichak then takes some blood of the dead Caveman and makes two familiar marks on the wall, shocking the others with surprise. When he asked if they seen the marks before, all of the Cavemen agree and point outside to tell him where they are.

Later, Chichak was about to shoot him, but only for Koba and a villager to chase him. Chichak kills the villager as Koba catches him to kill him. Chichak stabs his right leg, which gives the Cavemen the chance to kill him. When Sepinta sees Chichak, she was wondering who is he, which Turok tells her that he's his enemy. As Koba bravely tries to fend them all off and prevent them from reaching the other side, the fight triggers a hole in the bridge, with a Caveman dangling on to him to not fall. Koba gets him off as the Caveman hollers in horror and falls to his death and he dies in the void. Chichak and the other Cavemen can't reach the other side because the bridge is gone, but he tells Turok to look behind him. A lot of villagers have been killed, with Chichak vowing to kill Turok and the others, and reclaim his father's blame.

Meanwhile, Chichak asked him why was he not fighting by his side. He then sinks his hand in one of Turok's wounds and goes deeper. He then uses Turok's blood to make the mark on his face. When he asked him where are Catori, Andar, and the villagers, Turok refused to answer. Chichak then begins to slash him with a knife. Chichak later arrives with two Cavemen and reveal they've captured Andar, who secretly followed Turok. Chichak threatens to kill Andar if Turok doesn't tell him where the cliff people are. Later, Chichak then spares Andar and tells the Cavemen to watch over them.

Meanwhile, while the villagers were on their way to the summer hunting grounds, one of the Mastodons stepped on a sharp rock. Sepinta tells the others to put what she carries on the others. Catori then tells Sepinta that one of the women said that she sent no one to find Andar. Sepinta says that Andar may come back himself, but the truth is, she can't spare anyone. Catori asked if she must go alone, Sepinta tells her she would die. Catori begs for her to help her find her child, but Sepinta tells her that he's not a child and if he went after Turok, she can't make others pay for his mistake, much to Catori's dismay.

Suddenly, falling rocks are thrown by the Cave Dwellers. They managed to trap them and they begin to attack. Chichak is successfully able to kill many of them, and all of the Mastodons were killed by the Cavemen. Chichak's Cavemen eventually injured her mount after Aniwa and her Terror Bird both fight off several Cavemen. Sepinta and Catori both shoot arrows at the Cavemen. One Caveman was about to kill Catori, but Chichak shoots him and he threatens to kill her himself.

Suddenly, Chichak sees the tamed Carnotaurus with Turok and Andar. The Carnotaurus steps on several of the Cave Dwellers as Chichak tries to shoot it, but misses. Several of the other Cave Dwellers are knocked off of the cliff. Andar jumps off the dinosaur and to find Aniwa. She gives him a hug, and Aniwa tells him that the others said he was dead, but she knew he would come. Andar says that the man defends the people he loves. Suddenly, a Caveman attacks them, but the two kill him with two knives.

Andar shoots his arrows, while Aniwa uses her knife to fight off the Cavemen. The Cave Dwellers even try to fight the dinosaur. The Carnotaurus devours one of them and Turok jumps off the dinosaur. Turok slashes several of them with the tamed dinosaur aiding him. When Catori said, "What a beast,", Sepinta is shot in the head by Chichak. Enraged, Turok charges at him and they wrestle each other. Chichak was able to punch him a few times, but Turok manages to get his father's tomahawk and tosses it in the air before grabbing the handle again.

Chichak picks up his gun, laughs and says, "Die, Turok!" Chichak then fire his gun, but the bullet missed. Turok then threw the tomahawk and it went right through his neck. He tries to cover his neck from bleeding, but fails. Chichak is ultimately dead as his severed head falls on the ground. His head was stomped so flat by the tamed Carnotaurus and his body lays then on the ground. 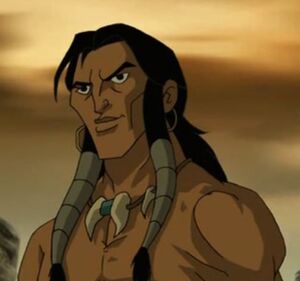 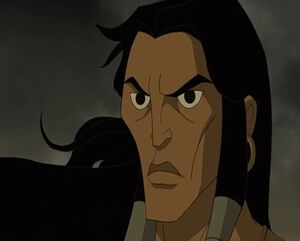 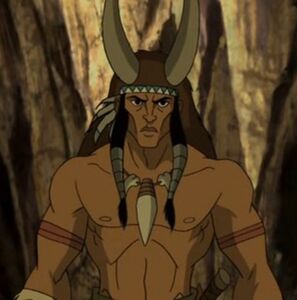 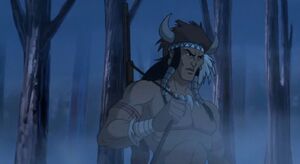 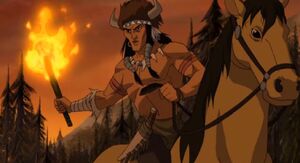 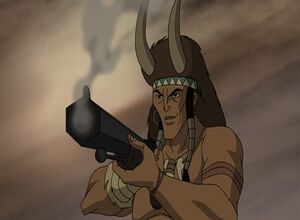 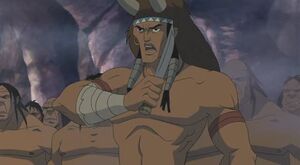 Chichak threatening Turok from the other side of the gap. 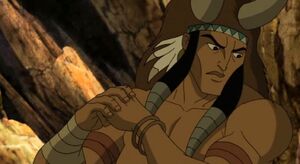 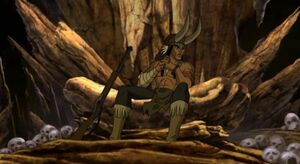 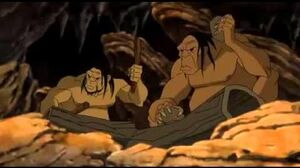 Full Movies Animation Turok, Son Of Stone
Add a photo to this gallery

Retrieved from "https://villains.fandom.com/wiki/King_Chichak?oldid=3705247"
Community content is available under CC-BY-SA unless otherwise noted.