King of the Floro Sapiens

King Croacus IV, usually called just King Croacus, is the main antagonist of Chapter 5 in the video game Super Paper Mario. He is the king of the Floro Sapiens and the possessor of the sixth Pure Heart.

Croacus is the flamboyant king of the Floro Sapiens, a race of plant-like creatures. He was he regent for King Croacus III until the young ruler wilted. Once he came of age, Croacus IV was appointed king, and was beloved for his stabilizing influence. Croacus adores beauty to the point of obsession. When the Cragnons begin polluting the water used by the Floro Sapiens, Croacus had his people kidnap and brainwash Cragnons with Flora Sprouts. They were then sent to mine in the Floro Caverns for jewels for Croacus' palace.

Mario, Peach, and Bowser encounter Croacus while searching for the Pure Hearts. Despite his lack of interest in fighting, he decides to dispose of them. He grows his main body around his head, consisting of three small heads and rose-like pedals from his normal head that protect his head from any damage. No matter what the heroes do, he cannot be harmed until he exposes his head.

He can be defeated by jumping from his smaller heads and then jumping to his normal head when it becomes exposed, or by using Thoreau to grab a smaller head and throwing it at his normal head. After taking enough damage, he shifts into a second phase where he loses the rest of his body and floats around on his head, throwing sharp pedals at the heroes. The pedals can be dodged or destroyed and attacking Croacus' head straight on. Additionally, Thoreau can be used to grab a pedal and throw it at his normal head.

Upon defeating him, Croacus reverts to his original form and collapses while turning pale, which the Floro Sapiens remarking that he wilted. They also explain that Croacus was trying to save his people by mind-controlling the Cragons with Floro Sprouts for polluting the water they drank from. Upon witnessing the scene, Flint Cragley declares that he will show his tape to the Cragnons, ending the war between the two races.

If the player visits Croacus after Chapter 5, he will still lie on the same spot on the floor, supposedly dead ("wilted"). The Floro Sapien who is watching over him says that he thinks that Croacus will revitalize, which he eventually does.

After clearing the game, King Croacus is seen in healthy spirits and less insane than before. He jokingly threatens the heroes with another battle, but states that the waters have become less polluted while he was sleeping. He says that he hopes he can help the Cragnons in the future. This suggests that, as the Floro Sapiens say, he is actually benevolent and was driven insane only due to the dirty water. 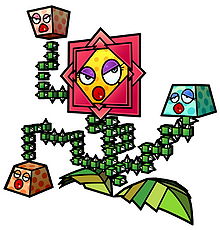