Giant
King Dark is the figurehead of the Government of Darkness, a giant robot who commands the agents of GOD, and the main antagonist of Kamen Rider X.

He was voiced by Fumio Wada.

He was brought down in the final episode and revealed to be a robot controlled by Dr. Curse, who activated King Dark's self destruct sequence in a final attempt to kill Kamen Rider X.

King Dark reappears as a member of Dai-Shocker. He emerged after the defeat of Shadow Moon to menace the Kamen Riders. However Diend arrived with Kamen Rider J and used the Decadriver Final FormRide card to turn Decade into the Jumbo Decadriver which in turn, transforms J into Decade Complete Form Jumbo Formation. Using the other Riders as giant Kamen Ride Cards, J destroys King Dark with a variation of the Dimension Kick.

Due to a change in history caused by Ankh leaving a O Medal behind in the year 1971, Shocker achieved its goal of world dominion with Shocker Greeed. Thus, members of the various groups that would had manifested in the normal timeline after Shocker's destruction instead joined Shocker. Alongside Apollo Geist, King Dark appeared on Shocker's leadership council to represent the Government of Darkness. He was later destroyed in the final battle when the Great Leader of Shocker assumed his Great Rock Leader form.

King Dark in All Riders vs. Dai-Shocker. 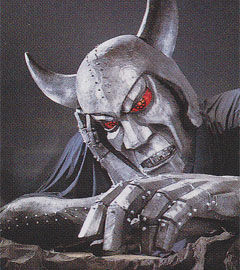 Artwork of King Dark.
Add a photo to this gallery

Retrieved from "https://villains.fandom.com/wiki/King_Dark?oldid=4049476"
Community content is available under CC-BY-SA unless otherwise noted.