Various abilities depending on member

Assist King Dedede in his schemes.

King Dedede's Army are an assorted group of enemies who help King Dedede out in his schemes and are the main antagonistic faction of the Kirby series. They usually consist of Waddle Dees and Waddle Doos as their most common unit but other species has help the King as well such as Gordos, Tacs or even Poppy Bros.

King Dedede and his minions stole all of the food from the people of Dream Land and, either to simply cause strife or demoralize the people, also made off with the Sparkling Stars, which he gave to his various servants to guard. However Kirby set out to set things right, getting the Sparkling Stars back from each of Dedede's top henchmen, before engaging Dedede himself. Despite the king’s efforts, he was beaten by Kirby and knocked flying through the ceiling of his castle.

After Nightmare took over the Fountain of Dreams to spread bad dreams, King Dedede took the Star Rod that powered it and gave its pieces to his most trusted friends, trapping Nightmare in the fountain unable to do anything. But as Kirby saw Dedede swimming in the lake around the fountain, he thought that Dedede was up to his usual mischief. As Kirby recovered the Star Rod and replaced it (with Dedede trying to stop him), Nightmare was set free, so Dedede inhaled both Kirby and the Star Rod and spat them into space to take down Nightmare.

In "Spring Breeze", which serves as a simplified remake of the original Kirby's Dream Land, Dedede and his minions steal all the food in Dream Land, only to be defeated by Kirby and have the food returned.

The DS remake of Kirby Super Star, Kirby Super Star Ultra, adds in a game called "Revenge of the King", where King Dedede and his minions plot to destroy Kirby once and for all and again stole the Sparkling Stars in order to lure him into fights with stronger versions of enemies that he had beaten before. When Kirby managed to beat them all, Dedede, calling himself Masked Dedede, took him on, wielding an upgraded mecha hammer. However, he was once again defeated and sent flying out of his castle. During the credit sequence, Dedede was last seen walking off sadly, with his Waddle Dees following behind him. Masked Dedede later appears as the third last boss of the "True Arena".

King Dedede and his minions builds a machine that creates dulipcates of Kirby and hosts a tournament, with the champion's prize being a giant cake. Kirby and Bandana Waddle Dee were given an invitation to this torment and they eagerly join, oblivious to the fact that it's another one of Dedede's traps. Dedede plans to defeat Kirby with his equally-skilled counterparts, causing him to be defeated and be humiliated in front of all of Dream Land. He eventually challenges them to a battle against himself. When he loses, he tells Kirby to follow him down an elevator into his stadium's basement. Kirby gives chase and is confronted by a colossal robot called Dededestroyer Z, piloted by Dedede. Kirby destroys it and foils Dedede's scheme, causing the Kirby Printer to explode and Dedede to be launched into the distance.

King Dedede and Meta Knight sets up a challenge for Kirby and Co. They send a letter to Kirby telling him about how they're awaiting at Summit of the Buddy Fighters Tower. Kirby and Co. defeats all of the Dedede's forces and fights the adversary duo multiple times. As a last resort, they put on the Masks of Dark Bonds. After being defeated once and for all, Dedede and Meta Knight proceeds walks in a sorrow manner in the games credits. 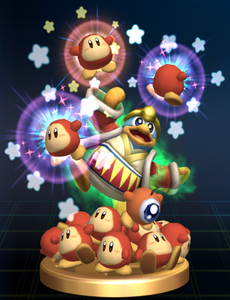 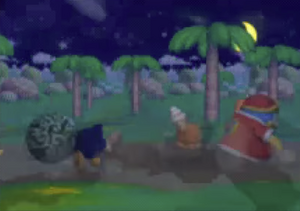 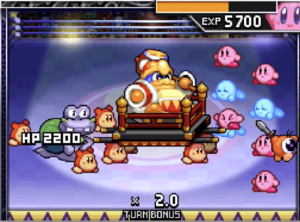 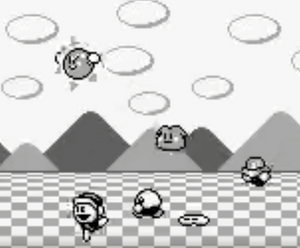 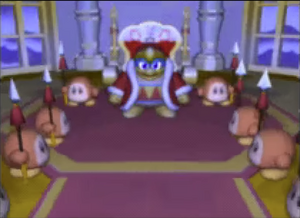 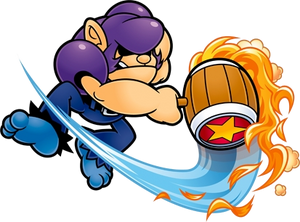