Eating, bullying Kirby and the residents of Dream Land, stealing food and anything Kirby wants

To be forever rid of Kirby, steal all of the people's food, capture the Sparkling Stars, buy monsters from Nightmare Enterprises to beat Kirby.

King Dedede (simply known as Dedede) is a heavyset avianoid and the self-proclaimed king of Dream Land, a country on the planet Pop Star. He is the most recurring antagonist of the Kirby series and Kirby's technical nemesis, but is surprisingly one of the least "evil" antagonists; most occasions in which he is an antagonist is when he has been possessed by the game's true antagonist, once by Yin-Yarn and Queen Sectonia and thrice by theDark Matter. His other roles as an antagonist can generally be attributed to selfishness, mischief, and his desire to prove himself better than Kirby. Besides having an enormous appetite, he wields an extremely large wooden hammer. In the Super Smash Bros. games, he is given a mechanized version of his hammer instead.

Dedede is very selfish and helps only when he sees no choice, and also somewhat lazy, like most of the other inhabitants of Dream Land (with exceptions such as Meta Knight). Dedede isn't so much of an evil tyrant as he is a plain old bully, throwing his weight around. He does a lot of nasty things, like stealing all of the people's food, but he also tried to do things to help Dream Land, such as by trapping Nightmare in the Fountain of Dreams. But due to his past tricks, Kirby is constantly suspicious of Dedede, and usually misinterprets his actions. In some games, mostly recent ones, he decides to fight on Kirby's side.  While Dedede is the supposed king of Dreamland, many people just go about their business with any thoughts towards this and Dedede himself takes his role as ruler for granted.

It would also seem that Dedede is jealous of Kirby, something that once led him to train to be able to inhale and float as Kirby does. He and Kirby often compete in ways other than just battling, such as various races and side games (Dedede may be one of the only characters, whose appetite can rival Kirby's).

King Dedede and his minions stole all the food of the people of Dream Land and, either to simply cause strife or demoralize the people, also made off with the Sparkling Stars, which he gave to his various servants to guard. However Kirby set out to set things right, getting the Sparkling Stars back, before engaging Dedede himself. Despite the king’s efforts, he was beaten by Kirby and knocked flying through the ceiling of his castle.

After Nightmare took over the Fountain of Dreams to spread bad dreams, King Dedede took the Star Rod that powered it and gave its pieces to his most trusted friends, trapping Nightmare in the fountain unable to do anything. But as Kirby saw Dedede swimming in the lake around the fountain, he thought that Dedede was up to his usual mischief. As Kirby recovered the Star Rod and replaced it (with Dedede trying to stop him), Nightmare was set free, so Dedede inhaled both Kirby and the Star Rod and spat them into space to take down Nightmare.

In "Revenge of the King", King Dedede plotted to destroy Kirby once and for all and again stole the Sparkling Stars, so as to lure him into fights with enemies he’d beaten before, but stronger. When Kirby managed to beat them all, Dedede took him on, wielding an upgraded mecha hammer. However he was once again defeated and sent flying out of his castle.

King Dedede once again ended up possessed by Dark Matter and fought Kirby and his friend, Gooey, at his castle in the Iceberg. After they defeated him in his normal state, the king developed darker abilities, including a Dark Matter eye on his body. However Kirby finally managed to defeat Dedede and drive the Dark Matter out of his body.

King Dedede came across one of the Crystal Shards and started looking at it. Kirby showed up and tried to take it so as to give it to Ribbon, but the king refused to give it up. At that moment, the Dark Matter showed up and, drawn to the Crystal Shard, possessed Dedede. He then attacked Kirby, but was defeated and freed of the Dark Matter. Dedede then reluctantly gave up the Crystal Shard and Waddle Dee made him begrudgingly agree to come with Kirby and his group in their quest. Dedede eventually accompanied the group to Dark Star and helped Kirby reach 02 so he could defeat it.

Kirby, thinking King Dedede had stolen his short cake, went to confront the king and managed to beat him. But at that moment, the Squeak Squad attacked Dedede’s castle, stealing his treasure chest and making their getaway. Enraged, he threw Kirby at the thieves, knocking them into Nature Notch.

Dedede was bossing around his Waddle Dees as usual, when he noticed an odd-looking one. He was then attacked by Yin-Yarn and all his imposter Waddle Dees and was sucked into Yin-Yarns’ magical sock, bringing him to Patch Land. Eventually Dedede came across Kirby, but suddenly found himself connected a bizarre marionette-like device that controlled him. Kirby managed to free the king, allowing him to get the sixth strand of Magic Yarn. Dedede later accompanied Kirby, Prince Fluff, and Meta Knight back to the yarn version of Dream Land.

Kirby eventually found his way to Dedede’s hideout in Dedede Resort, where the king engaged him in a hot air balloon, throwing bombs at Kirby. However Kirby bounced them back, sending him to the ground and finally defeated Dedede.

Dedede, along with one of his Waddle Dees, was chasing after Kirby in rage who apparently took his cake, when they came across an alien named Magolor, who had crashed his spaceship. They agreed to help him by getting the missing pieces back and succeeded in doing so. Magolor then brought Dedede and the others to his home planet of Halcandra, where they were attacked by Landia. Magolor told them that the dragon was running rampant on Halcandra and Dedede and the others agreed to defeat it for him. But when they succeeded, Magolor revealed that he’d been manipulating them to obtain Landia’s Master Crown so as to gain infinite power. He headed off to conquer Popstar and Dedede and the others followed with help from Landia, successfully defeating Magolor and making it back to Popstar.

King Dedede makes his debut as a playable character in Super Smash Bros Brawl. His Final Smash is the Waddle Dee Army, where he summons a huge horde of Waddle Dees, Waddle Doos, and Gordos to attack the opponents. He also appears as a false antagonist in the story mode; The Subspace Emissary.

Dedede mistakenly aided the Subspace Army in capturing the Halberd by attacking Meta Knight, not realizing he was keeping him from fighting off the Subspace forces. Eventually, Dedede learned of Tabuu’s plans and the power his Off Waves possessed. Worried that if everyone were to be turned into trophies, then Tabuu would easily take over, Dedede sought a means of stopping his plans. He created a special brooch that acted like a timer, before turning heroes turned into trophies back to normal. Dedede ambushed Luigi and turned him into a trophy, apparently to lure Wario in. When Wario tried to take Luigi,

Dedede stole his bobsled with Ness and Peach/Zelda inside, throwing Luigi in as well. Dedede then hid them and put brooches on them, giving up his own to put on the princess while planning to make another later. However Dedede was turned into a trophy by Bowser, who stole Peach/Zelda. After Tabuu turned all the other heroes into trophies, Luigi and Ness were restored and Kirby was also revived, having eaten the brooch Dedede put on Peach/Zelda. They in turn brought back Dedede, who went to Subspace with the others to fight Tabuu, getting Bowser and Wario to help them along the way.

King Dedede returns as a playable character in Super Smash Bros. 4 for the Wii U and 3DS. King Dedede appears to be slightly faster than his Brawl counterpart. His side special was also changed, as in Brawl, Dedede would randomly throw either a Waddle Dee, Waddle Doo, or Gordo. In this game, King Dedede will only throw a Gordo. His Final Smash was also changed from the Waddle Dee Army, to the Dedede Burst. King Dedede inhales enough air, which results in the creation of a mini-tornado. Anyone caught in the mini-tornado will be sucked towards King Dedede. Dedede will then hit the opponent(s) with his hammer two to three times, while it's engulfed in fire. Then finishes the Final Smash by throw a bomb at the opponent(s).

Dedede was the tyrannical ruler of Dreamland, clearly disliked by the people of Cappytown and aided by his right-hand man, Escargoon. However Kirby arrived, who Dedede feared could threaten his rule and whom he hated for being more liked by the people. Thus, he continually ordered monsters from Nightmare Enterprises and used various schemes to deal with Kirby, only for each one to fail. Eventually, Dedede and Escargoon turned on Customer Service, who’d manipulated Dedede in all of their dealings, as Kirby and his allies were battling Nightmare and took him down.

King Dedede is quite strong, but also agile and fast, able to leap high into the air and run surprisingly fast. He can also puff himself up to float through the air and even perform a version of Kirby’s inhale attack, though he can’t gain copy abilities. Dedede fights mainly with his large hammer and while most of the time it is a standard hammer, it has occasionally had other built in upgrades, such as a jet booster to amplify his strikes and built in missile launchers and flamethrowers. Dedede also uses other physical attacks, like a powerful ground pound from out of the air and sliding on the floor. King Dedede is quite possibly the (physically) strongest Kirby characters, as in all games he's been playable in he always has the most power, and Super Smash Bros. Brawl, Snake's conversation with Colonel reveals he can level an entire building, and given that he's only at least a foot taller than Kirby (who's only 8 inches), this is a large incredible feat (though this may be because his hammer is mechanical in Brawl, and he's significantly larger and taller in Brawl.) 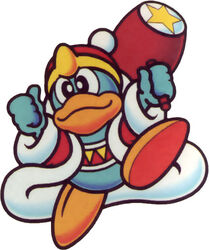 Retrieved from "https://villains.fandom.com/wiki/King_Dedede?oldid=1505131"
Community content is available under CC-BY-SA unless otherwise noted.