King Dedede (Kirby: Right Back at Ya!)

Get rid of Kirby once and for all (failed).

King Dedede is the main antagonist of the anime series Kirby: Right Back at Ya!. He is accompanied by Escargoon. Much like his video game counterpart, he is an obese penguin, the evil, greedy, lazy, selfish, cruel, abusive, and self-proclaimed king of Dream Land/Cappy Town, and the arch-nemesis of Kirby, who is bent on getting rid of him in any way possible. Instead of usually being more upfront with getting rid of Kirby as he is in the games, his most prominent tactic is buying monsters from Nightmare Enterprises who can later terrorize Kirby.

He is voiced by Kenichi Ogata in the Japanese version. In the English version, he is voiced by Ted Lewis, who also voiced Escargoon.

In "Beware: Whispy Woods!", Dedede, after arguing with the NME Salesman over why he should pay his company for selling him monsters that failed to beat Kirby, shows him a botanic magazine and reveals that it ties into his latest scheme to destroy Kirby. He and Escargoon then send a letter to Whispy Woods, which makes him believe that Kirby wants to destroy him. Following Melman the Mailman to Whispy's location, the latter having buried Kirby, Tiff, Tuff and Tokkori in apples because of Dedede's fake warning, Dedede explains his trick and proceeds to cut down the entire forest with his laser chainsaw, also temporarily kidnapping and imprisoning Kirby and his friends. Dedede renovates the land into a country club and prepares to play golf with Kirby as the ball, although the latter spits out and plants one of Whispy's apples. This revives Whispy Woods, allowing him to defeat Dedede and Escargoon before restoring the forest. Ironically, Dedede and Escargoon then get hopelessly lost in the newly grown forest.

In "Un-Reality TV", Dedede gives away free television sets to the citizens of Cappy Town and starts his own channel called Channel DDD, which becomes extremely popular with everyone except Tiff, who dislikes how much it detracts from the lives of everyone. Later on, Dedede broadcasts that a giant monster is heading towards Cappy Town in search of Kirby, destroying everything in its path; however, when Tiff goes outside, she finds that there is no monster at all. With almost everyone convinced that Kirby needs to go away in order to stop the monster and that Dedede is a hero for trying everything he can to stop it, he brainwashes most of Cappy Town into forming a mob to destroy Kirby. After saving Kirby from the mob and convincing her family that there really is no monster, Tiff, Tuff and Kirby go to Dedede's broadcasting station dungeon, where they discover that the monster is nothing more than Escargoon in a costume rampaging over a model set of Cappy Town, and that it had all been a plot by Dedede to try and discredit Kirby. Dedede and Escargoon trap the children in a cage to keep them from exposing the truth, although Kirby tears up the studio by inhaling everything towards the cage, also destroying the lock. Tiff then exposes Dedede and Escargoon's lies on television, breaking everyone free of their mind control.

In "Curio's Curious Discover", in order to boost his popularity with the citizens of Cappy Town and convince them that he is their rightful ruler, Dedede takes advantage of Mr. Curio's desperateness to keep his antique shop alive and forces him to forge artifacts that make it look like the Dedede Clan had always ruled over Cappy Town. While the entire town buys it and starts to acknowledge Dedede as their rightful ruler, Tiff, and later Tuff and Kirby, discover the truth and confront Mr. Curio, leading to Dedede and Escargoon kidnapping and tying them up to prevent them from revealing the truth. However, this act leads to Mr. Curio telling the truth about the fake artifacts, while Meta Knight frees the children, and Cappy Town once again turns on him. As a last-ditch effort, Dedede turns the Dedede Stone into a giant golem monster and unleashes it on the Cappies. Through the efforts of Meta Knight, Tiff, Tuff, and Mr. Curio, Kirby becomes Stone Kirby and demolishes the giant statue, leaving Dedede and Escargoon trapped under thousands of stone bricks, although Kirby presumably sucks up the pile and frees them soon afterwards.

In "Don't Bank On It", Customer Service ships Dedede dozens of "free" dolls of himself, and he plots to use them to make himself incredibly rich. Dedede convinces Cappy Town that the dolls are good luck charms to keep by their beds and gives one to all of its citizens. In reality, Dedede uses speakers in the dolls to mind control the citizens of Cappy Town into liking and trusting him, before getting them to deposit all of their money in his bank, which he plans on using to pay off his debt to Nightmare Enterprises. Becoming restless from his plan, in an act of petty vengeance, Dedede uses his connection to the dolls to pummel the citizens of Cappy Town, Escargoon included, and prevent them from sleeping (although Tiff had locked up her doll upon becoming suspicious). Dedede ends up getting his comeuppance when Escargoon discovers and Customer Service confirms that after a long period of time, any damage to the dolls will affect the real thing as well. Dedede and Escargoon then hurriedly gather all the dolls while their owners unknowingly cause Dedede pain. As this happens, the citizens of Cappy Town realize that Dedede had tricked them and withdraw their money, but Dedede uses his connection to the last doll, Kirby's, to abuse his enemy, while Escargoon, Meta Knight and Tiff look on in confusion. Kirby soon inhales the doll to stop it, unknowingly taking Dedede with it. Dedede was presumably freed from inside Kirby when he spits the doll back out.

In "Sweet and Sour Puss", Dedede ordered a monster by the name of Togeira from Nightmare Enterprises, but it completely took his anger away, forcing him to take several punishments from the citizens of Cappy Town, especially Escargoon, who wanted revenge on him for beating him. When the monster's anger has fueled up, Dedede got back his anger and violently attacks Kirby. After Kirby defeated Togeira, Dedede attacks Escargoon, and is back to his old self.

In "D'Appreaciation Day", Dedede announced that he would threaten to throw everybody in the dungeon, but the people of Cappy Town refused, and Chief Bookem says that the Cappies would appreciate him if he got out of town, making Dedede return to the castle. Dedede angrily says that he needs to be appreciated too. Melman the Mailman arrives at his castle with a present, and Dedede asks if the present is for him, but it was for Escargoon instead from his mom, making Dedede angrier. Just then, Kirby comes to Dedede’s castle with a gift for him. Dedede is delighted that someone finally appreciates him, despite that he was mean and selfish. However, as Dedede opens the gift, he receives a half-empty watermelon. Furious, Dedede tries to whack Kirby, but is stopped by Tiff and Tuff. As revenge, Dedede decides to invent his own appreciation day called “24 hours of disrespect”. Tiff, Tuff, and Kirby were walking down the path, discussing their failure for trying to appreciate Dedede, but suddenly, Kirby was chasing after a watermelon, leading to Dedede's trap, which was placing a time bomb in one of the watermelons. Kirby eats all of the watermelons, especially the one with the time bomb. Tiff tries to get Kirby to spit it out, but it was too late, and Kirby was sent flying in the air as the time bomb explodes inside him. He lands in Cappy Town, barbecued. Tiff announces that Dedede has gone too far, and decides to prank him back with the help of the Cappies. They set up a false funeral for Kirby, and Waddle Doo fetched a note to Dedede from Tiff. Dedede arrives at the funeral, thinking that he killed Kirby, and sobs in anguish. Dedede was really sorry, and he promises not to pull any more pranks on his subjects, and places a watermelon in front of Kirby's grave. Then Kirby pops out of his fake grave and eats the watermelon, shocking both Dedede and Escargoon. Dedede was happy that Kirby was okay.

Much like he is in the videogames, Dedede is greedy, mean, selfish, evil, abusive, and arrogant as a king and loves bullying and abusing the Cappies, especially Kirby. He will completely ignore anyone who even slightly says anything negative about him being a king unless it pushes his goals further, seeing the townsfolk as weaker, less wealthy, and therefore less meaningful than him. Much like his greediness stays the same in this version, and Dedede keeps his love for eating way too much food and being evil.

Despite being very similar to his videogame counterpart, this version of King Dedede is somewhat worse. His hatred for Kirby has taken over him and instead of keeping it just between him and Kirby, he has no regard for the townsfolk at all and often takes his huge hatred of Kirby out on innocent citizens of Cappy Town. Strangely enough, despite being a complete bully to pretty much everyone in Cappy Town, citizens still see him as a king and occasionally show some respect to him. While certainly more villainous than his other versions, he still keeps a comedic and incompetent personality, especially with his new partner Escargoon, who is slightly more competent than his king.

Though he is more villainous here than he is in the videogames, King Dedede actually still has a soft side, seeing as how he decided to keep his word and build a playground for the children as the asteroid Gerath came closer and closer to crashing into Dream Land, and takes Kirby there to show that his soft side truly does exist. He has also shown to actually have remorse and care for his foes; in one episode, while Dedede tried once again to defeat Kirby, Tiff and the town decided to pull a prank on him by faking Kirby's death with a full funeral that the entire town was in on; upon his discovery of this funeral, Dedede actually felt terrible about what he thought he did and cried at Kirby's fake gravestone, and when it was revealed to all be a prank, Dedede cried tears of joy and relief. 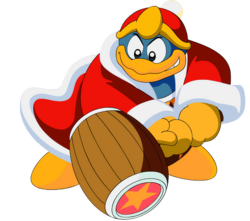 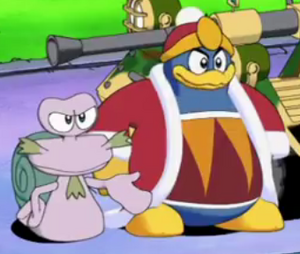 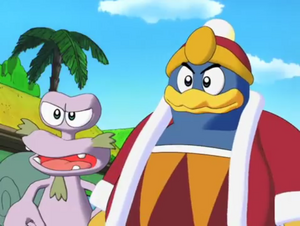 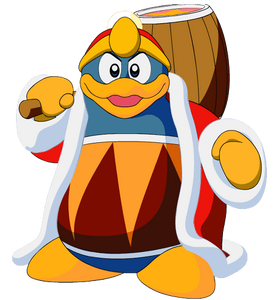