Right-Hand of the Devil

Manager of the Devil's Casino

Tricking the people who gamble at the Devil's casino.

Retrieve the Soul Contracts from Cuphead and Mugman for his boss (succeeded).

Kill Cuphead and Mugman for making him lose his bet (failed).

King Dice is the secondary antagonist of the 2017 run-and-gun videogame Cuphead. He is the evil, sleazy and treacherous manager of the Devil's Casino and the right-hand man of The Devil.

King Dice is fought in the stage All Bets Are Off. His battle is unique: instead of fighting right away, King Dice sics 11 animated Casino materials against the player.

He was voiced by Alana Bridgewater.

King Dice first appears when Cuphead and Mugman enter the Devil's Casino, and comments that they seemingly cannot lose. He then smirks as The Devil enters the casino and beats Cuphead at Craps after he bets his soul. The Devil then promises to free Cuphead and Mugman from their debt if they collect the Soul Contracts from his other debtors, and sends King Dice to make sure they complete the deal by blocking the passage to the other areas of Inkwell Isles. If Cuphead and Mugman face one of the debtors on simple difficulty, King Dice appears and reminds them that they can only get the Soul Contract by facing the debtor on regular.

After Cuphead and Mugman complete the second island, King Dice and The Devil then have a conversation regarding Cuphead and Mugman's success. While admitting that the brothers are doing a good job, King Dice states that he believes that they are up to something, although The Devil assures him that if they try anything, he will be waiting.

Once Cuphead and Mugman collect the final contracts, King Dice confronts them at the Devil's Casino. Initially complimenting them for successfully completing the deal, he then angrily states that their success has caused him to lose a bet, and that they are going to play a "game" before seeing The Devil.

King Dice is an extremely sleazy, deceitful, untrustworthy and manipulative individual. As the manager of the Devil's Casino, besides running the Casino his main job is to fool others into thinking that they are having a lot of luck and make them overconfident enough to think that they can beat The Devil when he offers to play with them, and then takes great joy in watching his victims try to do so in front of him. While normally relaxed and sadistically cheerful, he can be extremely cruel and abusive if he wants to be, as shown when he crushes (and supposedly kills) his minion Mr. Wheezy with his shoe for losing to Cuphead.

Being very arrogant and overconfident in himself, King Dice believes that no one is allowed to "mess with him" and that he can easily defeat anyone who tries to, which ultimately leads to his defeat. Due to his nature, even The Devil does not like him very much, regarding him as "good for nothing" and proud that Cuphead and Mugman managed to defeat him. 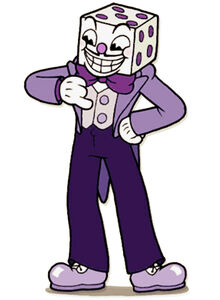 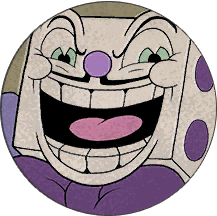 "So clever, so dapper, ya betta' believe this dice is loaded. Hi-de-ho!" Final Phase 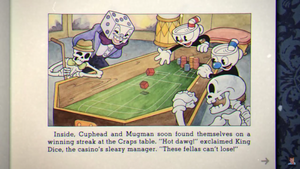 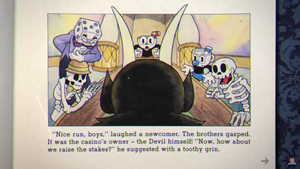 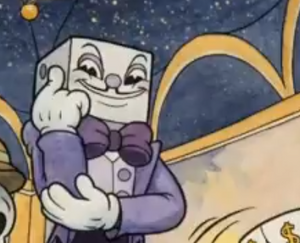 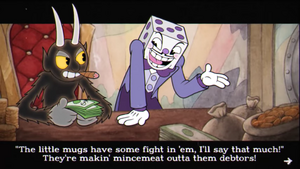 King Dice with The Devil having a discussion about Cuphead and Mugman regarding the brothers' progress. 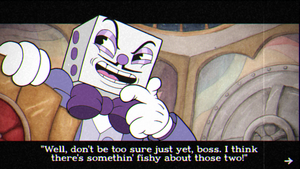 "Well, don't be too sure just yet, boss. I think there's somethin' fishy about those two!" 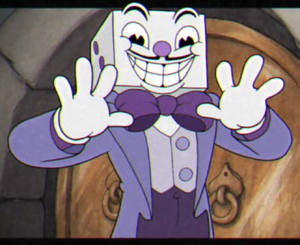 "Well, lookee here! You actually pulled it off... but you've made me lose a bet!!"

"And for that, you ain't seein' the boss just yet. We're gonna play a little game first!"

King Dice's defeat. Note that his head has a chip and his tuxedo appears ragged.
Add a photo to this gallery 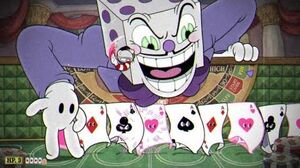 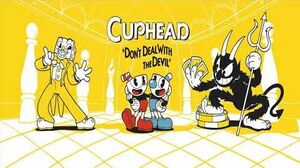 Cuphead - Die House - Music
Add a photo to this gallery

Retrieved from "https://villains.fandom.com/wiki/King_Dice?oldid=3500172"
Community content is available under CC-BY-SA unless otherwise noted.