King of the Saxons

Torturing and killing his peasants.

Kill Bowen and anyone else who opposes him.

Keep Draco alive to sustain his immortality.
Forever rule Britain with an iron fist.
Make Kara his Queen (all failed).

King Einon is the main antagonist in the 1996 action/adventure/fantasy film Dragonheart.

He was portrayed by Lee Oakes as an adolescent and David Thewlis as an adult, the latter of which also portrayed Ares in Wonder Woman and Zack Snyder's Justice League and V.M. Varga in the third season of the television series Fargo.

Einon was a very cruel, heartless and sadistic individual. He was extremely narcissistic and immensely callous and completely unaffected by the suffering he caused. His pure evil is almost driven to the point of murdering members of his own family and attacking his own trusted allies.

In the year 984, Prince Einon is being educated by his mentor Bowen, who teaches him about the Old Code, in an attempt to prevent Einon from becoming like his tyrannical father King Freyne. The King leads his army during a peasant rebellion. Einon attends the battle and finds his father mortally wounded. Believing that his father is already dead, Einon takes his crown, but Freyne comes round and attempts to stop Einon with the last of his strength, but Einon struggles free shouting "It's mine!". The noise alerts a peasant girl named Kara, who accidentally knocks Einon onto a spike and impaling his heart, mortally wounding him. Bowen arrives and removes Einon from the battlefield and takes him home.

When his royal physicians are unable to heal him, Einon's mother Queen Aislinn takes him to a dragon, Draco, who agrees to give Einon a piece of his own heart, if he promises to rule with justice and virtue. However, Einon becomes just as evil as his father by forcing the rebels to rebuild the castle and orders the leader of the rebels (Kara's father) to be blinded. When confronted by Bowen about not following The Old Code, Einon replies that the King is above the code. Bowen replies that no one is above the code, especially the King. Bowen fights Einon's soldiers to get the point to the young King before returning to the dragon's cave, believing that his heart corrupted Einon and swears vengeance.

Twelve years later, King Einon has successfully rebuilt the castle and, while pursuing Kara after she unsuccessfully attempts to assassinate him for murdering her father, reveals to Bowen that he has been evil all along and lied about his oaths. He then fights Bowen and nearly kills him, but Draco intervenes and takes both him and Kara away.

When the rebelling peasants become more influential and formidable after Bowen, Kara, Brother Gilbert, and Draco join them, Einon is presented by his mother with dragon-slayers to kill Draco, secretly knowing it will kill him, as well. When Einon learns of this, he realizes his mother's intentions and kills her for intending to "correct a mistake made years ago, when she saved a creature not worth saving." The rebels then invade the castle and Einon fights Bowen again, ending with Einon falling off a tower into a pool.

Einon survives the fall and takes Kara hostage, but Draco forces him to release her by biting himself. Fuming, Einon tries one last time to kill Bowen by charging at him with a dagger. Draco begs Bowen to kill him, as it is the only way to truly put an end to Einon's evil. Reluctantly, Bowen does so, killing both Draco and Einon.

In Dragonheart: A New Beginning, although he doesn't appear in the film, especially after his defeat, Einon was referenced as the prince, who was wounded in battle in a book while a picture of a dragon is shown giving a piece of his heart to a prince during s scene where Drake learns about his heritage of his kind.

Einon about to be given half of Draco's heart after being fatally injured.

Einon's menacing stare when he notices Kara in a reflection as she tries to murder him.

Einon trying to seduce Kara after locking her up.

Einon is shocked when Draco appears before him.

Einon witnessing a group of rebels led by Bowen outside his castle.

Einon preventing his mother from killing Draco, knowing their fates are linked.

Einon dies from his wounds after Bowen throws an axe into Draco's heart. 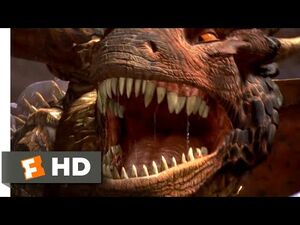 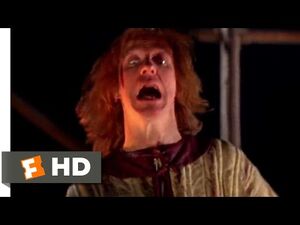 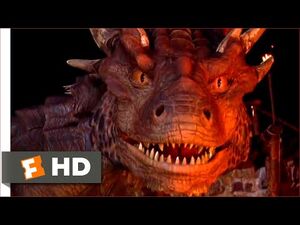