Gain the approval of his people and destroy Hercules (failed).

King Eurystheus is a major antagonist in the 2014 epic action movie Hercules. He was the former boss of Hercules but revealed as a helper to Lord Cotys.

He was portrayed by Joseph Fiennes, who also portrayed Fred Waterford in The Handmaid's Tale.

in the movie he is introduced as Hercules former employer, who tasked Hercules with killing the legendary Hydra (which turned out to be a group of outlaws with masks).

When Hercules is imprisoned in Cotys's dungeon, Eurystheus reveals himself to Hercules and tells him that he murdered his wife and children and that he aided Cotys all along. He brought with him the three wolves that killed Hercules' family, but Hercules manages to free himself and his companions and kill the three beasts.

After his escape from Cotys's dungeon, Hercules follows a fleeing Eurystheus and confronts him in Cotys's throne room. Though Eurystheus begs for mercy by saying that Cotys poisoned his mind, Hercules stabs him with his own dagger, killing him. 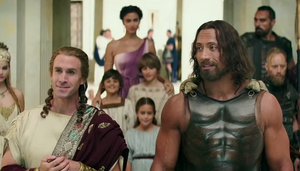 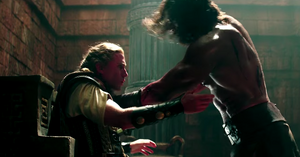 Eurystheus being stabbed to death with his own dagger by Hercules.

Eurystheus' corpse.
Add a photo to this gallery
Retrieved from "https://villains.fandom.com/wiki/King_Eurystheus?oldid=4053051"
Community content is available under CC-BY-SA unless otherwise noted.