Complete control over Pluto and his subjects

Manipulating his people on Pluto being a planet.

Continue to remain the king of Pluto (presumably succeeded).

King Flippy Nips (simply known as Flippy Nips) is one of the two main antagonists of the Rick and Morty episode "Something Ricked This Way Comes", (the other being Lucius Needful). He is the tyrannical ruler of Pluto and lies to his people that his planet is not shrinking, in order to keep his position.

He was voiced by Richard Fulcher.

King Flippy Nips makes his first appearance after Jerry and Morty are abducted by a ship and taken to Pluto (where Jerry tried to call NASA about Pluto's planetary status before he and his son were abducted). Jerry and Morty then meet him where he is happy that Jerry believes Pluto is a planet, and Jerry becomes a spokesperson to the population, assuring them that they are still a planet. The large cheering crowd quickly inflates Jerry's ego.

Jerry would become a popular figure to the Plutonians, where he would appear in various events to advocate that Pluto is a planet. Morty would later encounter Scroopy Noopers, a Plutonian scientist who reveals that major corporations are mining plutonium from Pluto's core, thus making the planet shrink and slowly die. Jerry's opinions fall into line with these corporations, who are desperate to keep the public uninformed about the problems in order to remain wealthy. Morty attempts to persuade his father to tell the populace the truth but to no avail. When King Flippy Nips captures Scroopy Noopers and reveals he's his son, Jerry works up the courage to tell the population of Pluto their problems.

Despite Jerry telling the truth, he is booed and kicked off the planet and sent back home (where Jerry flips off the ship that kicked him out of it). It is unknown if the planet survived and if King Flippy Nips is still the ruler, but it is likely that is not the case due to the previous events of the episode and the Plutonians refusing to accept the truth.

At some point in time, King Flippy Nips would obtain the position as the king of Pluto. He would also bear a son, Scroopy Noopers, who tried to conspire against him due to concealing the truth about the planet's upcoming demise. King Flippy Nips would continue to remain king after kicking out Jerry Smith from his planet and arresting his own son (presumably if the planet was not destroyed later after these events).

King Flippy Nips is a greedy, power-hungry, self-centered, arrogant, manipulative and hypocritical individual who will do whatever it takes to remain as the king of Pluto. He is well aware of the inevitable demise of Pluto but does not inform his people in order to remain as king. King Flippy Nips was even willing to send his own son to prison in order to keep his reputation intact. 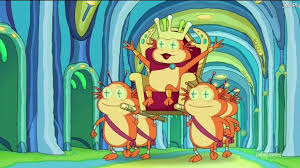 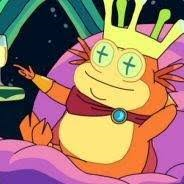 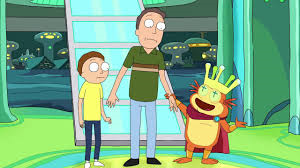 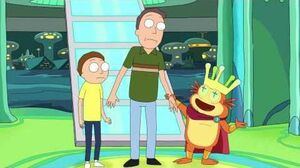