Leader of the Space Bugs.

Would=be destroyer of humanity
Would-be conqueror of the universe

Has the ability to fly due to having purple wings on his back.

Can summon giant Yellow minion bugs on his command.
Can shoot bullets out his mouth from multiple directions.

Destroy the Gyaraga (failed).
Take over the universe (failed).

King Galaspark is the main antagonist of the Galaga series and the leader of the Galaga but doesn't make an appearance until at the last level of Galaga Arrangement. He is battled in the Enemy-Comb Zone and is a huge red fly with purple wings, but his body gets redder as the Gyaraga progresses through the three phases of the boss battle. After you deal enough damage to him he explodes.

After the Gyaraga encounters King Galaspark in the Enemy-Comb Zone and begins to fight him, Galaspark simply moves back and forth from each side of the screen and summons giant Yellow Minion Bugs as well as shooting bullets himself.

When the Gyaraga start to deal more damage onto Galaspark, he becomes aggravated and will drift back and forth vertically as well as side to side. He also starts summoning large groups of various Space Bugs which become extremely difficult to avoid Galaspark's attacks as well as trying to keep damaging him.

By the time the Gyaraga deals enough damage to Galaspark, he stops summoning Space Bugs but becomes even more enraged. During in between patrols from the sides of the screen, Galaspark shoots bigger bullets all over the screen and will then dive towards the ship in an attempt to destroy it in one attack.

Once the Gyaraga has put a significant amount of damage on Galaspark, he becomes paralyzed and eventually explodes after he is defeated by the Gyaraga. The Gyaraga then takes off and the end credits appear. 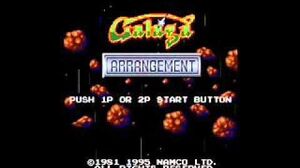 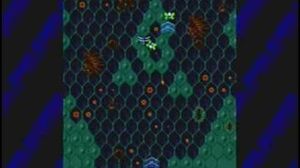 GD2 Longplay 9 Galaga Arrangement (3 3)
Add a photo to this gallery
Retrieved from "https://villains.fandom.com/wiki/King_Galaspark?oldid=2588672"
Community content is available under CC-BY-SA unless otherwise noted.