VeggieTales: King George and the Ducky

Return the rubber duck to Thomas (succeeded).
Govern his kingdom.

King George is the titular main protagonist/antagonist of the VeggieTales episode King George and the Ducky, a retelling of the Biblical story of King David and Bathsheba. He is a greedy and selfish monarch who likes to steal from his subjects when they have something he wants, in this case, a rubber duck. However, he later redeems himself after realizing the error of his ways.

He is played by Larry the Cucumber, who was voiced by Big Idea Entertainment's co-founder Mike Nawrocki.

King George was the ruler of his own kingdom, but his favorite pastimes were bathing and collecting rubber ducks to use in his baths. Even when his kingdom became engaged in the great pie war, the king did little to help and often ignored the conflict and his assistant Louis in favor of taking his baths.

One day, as Louis is trying and failing to get the king's attention, the king looks out on his kingdom and sees a poor boy named Thomas bathing with a rubber duck, which he obviously loves. The king sees that there is a duck that he does not own and wants it for his own. Louis tells him that he has many ducks that are all good, but the king says they bore him now and the only one he wants is Thomas. Despite threatening Louis with pain, Louis tells King George that they cannot just take the duck, as it will tarnish the king's reputation and make his people fear him.

Just then, King George's general Cedric comes in to report that more men are needed on the front lines of the war. King George gets an idea, and commands that Thomas be drafted into the war and put on the front lines while everyone else steps back. The general and Louis are horrified by what this entails for the poor boy, but the king does not waver, and they comply with his orders.

That night, King George and Louis sneak out and steal the duck from Thomas's house. As King George plans to bathe with his new possession, the general and Thomas return, with the general telling the king that Thomas fought so valiantly that he single-handedly stopped the enemy advance, though Thomas suffers extreme PTSD and is constantly thinking he is still in the war, which the general says could be a lifelong issue. Despite the king saying he will receive high honors, he reveals to Louis that he does not care about Thomas and only about the duck he stole from him.

However, King George is visited by a wiseman named Melvin, played by Pa Grape, who tells him a story: a rich man once lived, owning many sheep. A poor man lived nearby, but only had one lamb that he loved like family. When a guest came to visit the rich man, the rich man did not slaughter one of his sheep to feed the guest, but instead stole the lamb of the poor man to feed the guest. King George is appalled, and asks if the story is true. Melvin tells him that it is, enraging the king. King George asks who the man is so he may spend the rest of his days in the dungeon. Melvin reveals that King George is that man, having stolen something loved for his own despite having all that he could ever want. Melvin explains that God is displeased with the king, and that he must ask God and Thomas for forgiveness and make it right.

King George is an egotistical, selfish and greedy tyrant who cares more about his hobbies and possessions than he does the good of his kingdom or its people, even ignoring war just to have time to himself. He hates being told that he cannot have something, as it makes him want it even more. He also despises being corrected or argued with, yelling at people when they disagree with him. However, after his eyes are opened, he realizes the error of his ways and agrees to be more caring. 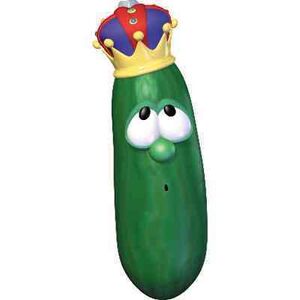 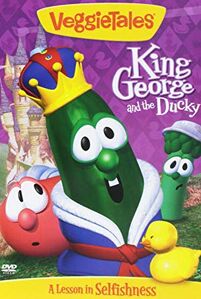 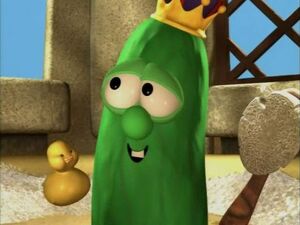 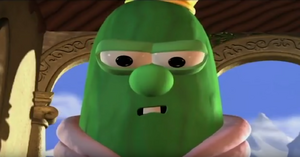 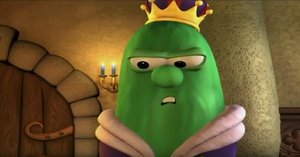 King George's angry stare.
Add a photo to this gallery 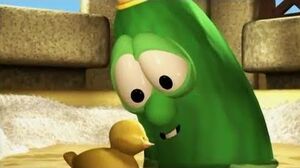 Retrieved from "https://villains.fandom.com/wiki/King_George_(VeggieTales)?oldid=4355441"
Community content is available under CC-BY-SA unless otherwise noted.