As with his Showa counterpart, Ghidorah is a space three-headed dragon kaiju that responsible for the destruction of countless worlds. What made this incarnation much more powerful and terrifying than the former however, are its nature as godlike kaiju and inversed relationship with an alien civilization: This Ghidorah evolved as an energy based lifeform from an unknown dimension where life forms lack physical form and was worshiped by Exif race as their God; 100,000 years ago, Exif race sacrificed their homeworld Exifcalus to the godlike kaiju out of belief that creatures such as him are a form of divine punishment intended for decadent civilizations that pronounce themselves the lords of creation. Worshiping Ghidorah's three-headed aspect as the "Golden King," Exif wandered the vastness of space for many millennia after the destruction of the planet to convert the inhabitants of countless other worlds to their faith before summoning Ghidorah to eat them, and intended to do the same to Earth. 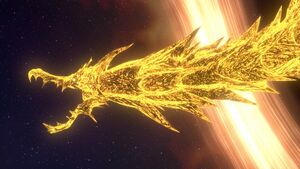 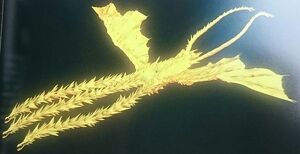 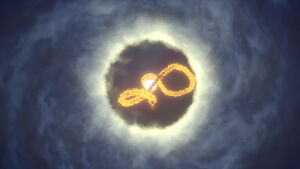 Retrieved from "https://villains.fandom.com/wiki/King_Ghidorah_(Godzilla:_The_Planet_Eater)?oldid=3522989"
Community content is available under CC-BY-SA unless otherwise noted.