Traveling throughout the universe and destroying planets.

Kill Godzilla, the Evangelion users, and all who stand in his way (both failed).

King Ghidorah is the main antagonist of the 2019 4-D simulation ride Godzilla vs. Evangelion: The Real 4-D formerly at Universal Studios Japan, a crossover ride between Shin Godzilla and Neon Genesis Evangelion.

Mysterious storms have been tracked across the Kansai Region, causing a record-breaking number of lightning strikes. Researchers believe they may have been caused by cosmic rays. Said storms have also caused the destruction of the Mahoroba asteroid probe during its reentry into the Earth's atmosphere. The last image captured by the probe before loss of communication showed a massive shadow.

During NERV's showcase for the new GLAUX transportation vehicles, Godzilla suddenly shows up in Osaka-III. Assuming him to be another Angel and the possible suspect behind the storms, NERV sends the Evangelion units out to stop him. Despite their efforts, Godzilla withstands the attacks from all three units and swatted them away before charging his atomic breath. However, instead of aiming at the units or the city, Godzilla fires his beam at the sky, striking an invisible target that triggers a large explosion. The fireball changes shape to the form of a three-headed dragon, revealing the true culprit behind the attacks, King Ghidorah.

With NERV unable to detect Ghidorah's powers, they order the Evangelion units to stand back as Godzilla clashes with Ghidorah. Godzilla blasts a beam at Ghidorah, only for it to fly off an invisible force field. Ghidorah uses his electric gravity abilities to levitate buildings from the ground and chuck them at Godzilla. Seeing Godzilla losing the battle, the Evangelion units attempt to distract Ghidorah, but to no avail and are blasted aside by his electric beams. Once Godzilla stands up, Ghidorah attacks him and attempts to kill him by constricting him, only to be thrown off when Godzilla catches him by surprise with lasers from his dorsal plates, although this causes Godzilla to temporarily run out of energy.

Fortunately, Godzilla's attack on Ghidorah causes a wound on his chest, with NERV conducting that it is the key to defeating him. Climbing a tall building, Unit-02 and Unit-00 jump onto Ghidorah and grab hold of his leg when he flies by. Ghidorah's heads try to blast them off, but Unit-02 blocks his attacks with its shield. With Ghidorah distracted, NERV supplies Unit-01 with a large red sword. It jumps from Godzilla's tail and the levitating buildings before plunging the sword straight into Ghidorah's wound, sending him crashing into the buildings below.

As the unit pilots question each other if they succeeded in defeating Ghidorah, the vile dragon emerged from the rubble completely unharmed. He turns his wrath at the motionless Godzilla and blasts him with his electric beam. Godzilla awakens just in time and pushes the beam with his atomic breath. Ultimately, Godzilla's beam overtakes Ghidorah's beam and destroys him in a massive explosion. With his archenemy defeated, Godzilla triumphantly returns to the ocean. 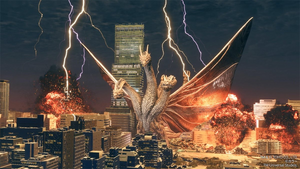 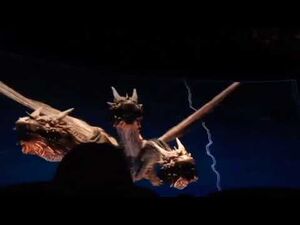 Godzilla Vs Evangelion- The Real 4-D