Pawn of the Futurians

Destroy Japan for the Futurians.

In the year 1992, time-travelers from the year 2204 (known as Futurians) arrived in Japan to warn of a terrible cataclysm. They claimed that in the future, Godzilla would return and completely destroy Japan. The Futurians received permission to travel back to the year 1944 and remove a Godzillasaurus from Lagos Island prior to the hydrogen bomb test ten years later, which they believed would prevent it from ever becoming Godzilla. In the dinosaur's place, the Futurians left three genetically-engineered creatures called Dorats, which were exposed to the bomb test ten years later, turning them into King Ghidorah.

In the present day the Futurians, revealed to be terrorists who wanted to prevent Japan's future economic reign, unleashed King Ghidorah in the city of Fukuoka, planning to bring the nation to its knees. The Japanese government mistakenly believed that the Godzillasaurus was still dormant in the Bering Sea, where the Futurians had moved it to, and that they could turn it into a new Godzilla by blasting it with nuclear energy. The government sent a nuclear submarine to the Bering Sea, but it was intercepted en route by the fully-mutated Godzilla, who destroyed it and increased in size and power. Godzilla had not actually been removed from history, but rather created in the first place by the Futurians, because the Godzillasaurus was exposed to a nuclear submarine crash in the Bering Sea in the 1970's. The re-energized Godzilla came ashore at Hokkaido, and prepared to challenge King Ghidorah. The two monsters battled, and King Ghidorah began to gain the upper hand against Godzilla, stomping him into the ground and strangling him with his necks. However, a group of people attacked the Futurians' base of operations, the time-traveling aircraft MOTHER, and destroyed the device that controlled King Ghidorah. With Ghidorah disoriented, Godzilla broke free from his grip and blasted off his middle head with his atomic breath. Godzilla then destroyed MOTHER, killing the Futurians' leader Chuck Wilson, his associate Grenchko, and their army of androids. King Ghidorah tried to escape, but was shot down over the ocean by Godzilla. 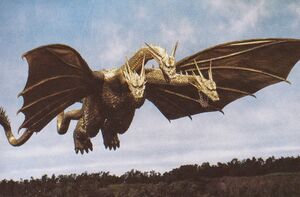 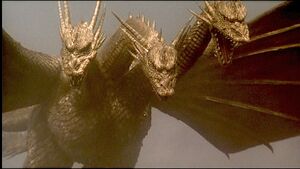 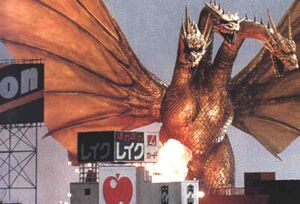 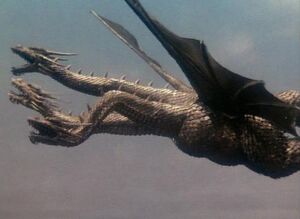 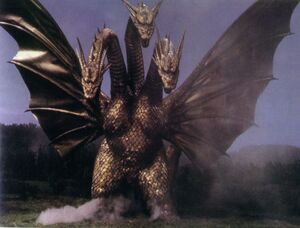 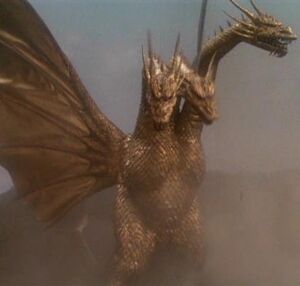 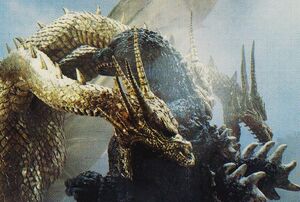 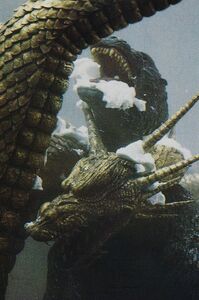 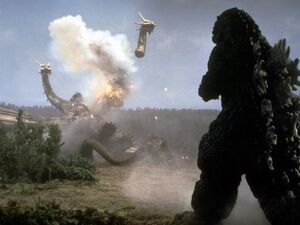 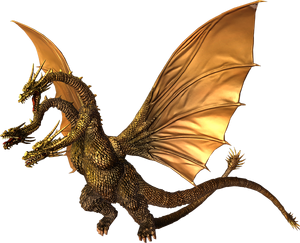 King Ghidorah as he appears in Godzilla PS3 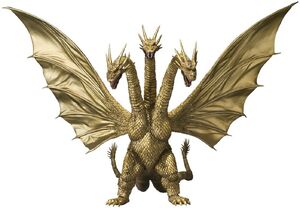