King Ghidorah is the overall main antagonist of IDW Publishing's main series of Godzilla comics. Awakened from a temple by a monk as monsters laid waste to the globe, Ghidorah did battle with Godzilla and then Mechagodzilla before being seemingly defeated by Mechagodzilla's shock anchor. The Cryog commander Rhizon discovered the comatose Ghidorah and used his race's technology to convert him into Mecha-King Ghidorah. It was later revealed that a second spacefaring King Ghidorah was responsible for wiping out the Cryog homeworld.

As monsters such as Godzilla laid waste to human civilization around the globe, a monk sacrificed his life to awaken King Ghidorah from an ancient temple. The three-headed monster made his way to Washington, D.C. to challenge Godzilla. Godzilla triumphed over Ghidorah, knocking him down and leaving him behind. Ghidorah recovered and entered a battle between Godzilla and Mechagodzilla. A three-way battle ensued, in which Mechagodzilla knocked out both monsters by electrocuting them with its shock anchors. Godzilla eventually recovered, but Ghidorah remained unconscious in a comatose state.

While the Cryog commander Rhizon was posing as the Russian warmonger Dyachenko, the evil psychic twins Minette and Mallory led him to King Ghidorah's wounded and comatose body. Rhizon ordered Gigan to sever Ghidorah's middle head so he could replace it with a mechanical one and gain control over the monster. King Ghidorah was converted into Mecha-King Ghidorah and telepathically controlled by Minette and Mallory. He was finally deployed to Boston to intercept him during his battle with Rhizon's Mechagodzilla units. Mecha-King Ghidorah captured Godzilla and carried him to the Dyachenko robotics facility in Siberia to battle against himself and two Mechagodzillas. Godzilla was outmatched until his ally Anguirus entered the fray. Together, they destroyed the Mechagodzillas and damaged Mecha-King Ghidorah's controller, causing the cyborg to retreat to outer space, possibly in search of others of his kind according to Rhizon.

When Rhizon was taken prisoner by Emperor Karkaro, he recalled to him how their planet was destroyed by another King Ghidorah. While Karkaro fled, Rhizon remained behind and rallied the survivors, leading the search for a new home planet. 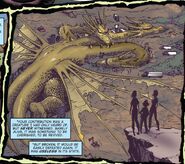