Control over his warriors and space armada

In the movie, he was voiced by Sir Patrick Stewart, who also played Pharaoh Seti I in DreamWorks' The Prince of Egypt, Dr. Jonas in Conspiracy Theory, Avery Bullock in American Dad, Darcy Banker in Green Room and King Buffo in the Courage the Cowardly Dog series. In the TV show, he was voiced by S. Scott Bullock.

In the movie, King Goobot tries to kidnap the parents of Jimmy Neutron and his friends, so he can feed them to Poultra, the god of Yolkus. He was assisted by his younger brother, Ooblar, and although he tried to off Jimmy and his friends after they rescued their parents, Jimmy grew to a huge size and defeated him.

In the TV show, King Goobot arrives on Earth and pretends to be nice to the citizens and he even invite the citizens to a party (which it's actually a trap), but Jimmy suspects something about Goobot's scheme before Goobot bans him from the party as the citizens believe that Jimmy's a bully to the Yolkians. Later, he steals one of Jimmy's inventions to revive Poultra and trap the citizens as he tries to feed them to Poultra, but then Jimmy puts some Purple Flurp in Poultra's water bowl and then Poultra explodes after she belched. Then King Goobot goes back into space in a giant eggshell spaceship along with the other Yokians and Ooblar before the citizens apologize to Jimmy for not believing him earlier, and then they praise him as a hero.

King Goobot's also the leader of the League of Villains, whose goal was to get revenge on Jimmy Neutron. Later he was trapped in the Cretaceous period along with the other villains, and remained there.

King Goobot's portrayed as greedy, deceiving and authoritative. He's the tyrannical, arrogant, manipulative, and self-centered king of Yokus. He's a power-hungry and a dictatorial oppressor who can control his warriors and his space armada. One of his most malevolent and duplicitous plans's when he theoretically tries to destroy Retroville. 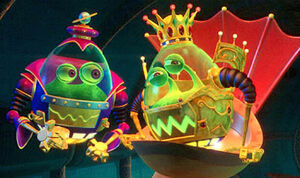 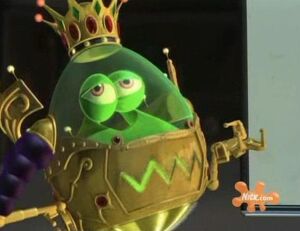 Goobot, as he appears in the The Adventures of Jimmy Neutron: Boy Genius. 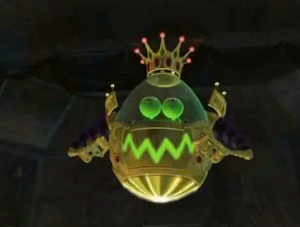 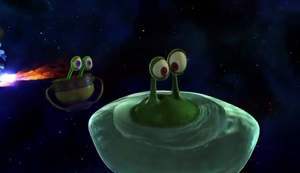 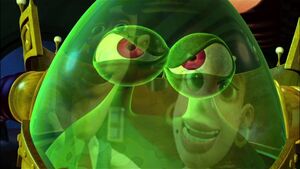 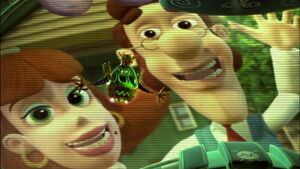 "The search is over!"
Add a photo to this gallery

Retrieved from "https://villains.fandom.com/wiki/King_Goobot?oldid=4125257"
Community content is available under CC-BY-SA unless otherwise noted.