Watching the ocean outside his Castle with the imprisoned unicorns inside it.

Capture every last Unicorn in existence to ensure his "happiness" (possibly failed).

King Haggard, also simply known as Haggard, is the main antagonist of the 1968 fantasy novel The Last Unicorn by Peter S. Beagle, and its 1982 animated film adaptation of the same name. He is the king of a dreary town known as Hagsgate.

In the 1982 animated film adaptation, he was voiced by the late Sir Christopher Lee, who also played Frankenstein's Monster in The Curse of Frankenstein, Count Dracula in Hammer Studios' Dracula films, Lord Summerisle in The Wicker Man, Francisco Scaramanga in The Man with the Golden Gun, Cushing Catheter in Gremlins 2: The New Batch, Saruman in Sir Peter Jackson's The Lord of the Rings and The Hobbit film trilogies and Count Dooku in the Star Wars prequel films.

Haggard's origins are uncertain - some of his subjects say he was born from a cloud covering the sun. Legend says that his kingdom was green and prosperous before he conquered it, and became a barren wasteland the moment he set foot on it. Another legend (later revealed to be true) says that a witch created his castle for him. When he refused to pay her for her work, she cursed him, saying he would live in the castle until his greed caused the sea to overflow. His minion is a mysterious creature called the Red Bull, who is bound to serve anyone who has no fear. He himself has never been happy, save for when he looks at unicorns. So he commands the Red Bull to chase them all into the sea, so that he could watch them all drifting in and out on the tides near his castle to his delight.

Schmendrick, Molly Grue, and the Unicorn (now in human form) proceed to Haggard's castle and seek entry. King Haggard is at first unwelcoming, and Schmendrick introduces the Unicorn only as his niece Lady Amalthea. Schmendrick requests that the three of them stay there as members of Haggard's court, only to be told that all of the royal complement has long since been dispatched: the only remaining occupants in the castle are Haggard, his adopted son Prince Lír, and four ancient men-at-arms. Haggard consents to lodging the trio, replacing his more competent on-call wizard with Schmendrick, and setting Molly Grue to work in his scullery. Schmendrick soon suspects that Haggard's true reason for taking them is because he suspects Lady Amalthea's true identity.

After a while, Amalthea begins to forget her identity and her reasons for coming to the castle, and eventually falls in love with Prince Lír. Caught in a complex web of newfound emotions, she struggles with thoughts of abandoning her quest for the sake of mortal love.

Haggard confronts Amalthea in private conversation, hinting at the location of the unicorns, yet from the waning magic in her eyes, he has doubts regarding his previous suspicions that she is more than she seems. Molly ends up learning some clues on the location of the Red Bull's lair from a talking cat.

Going through a secret passage in a broken clock in the castle basement, Schmendrick reveals Amalthea's true identity to Lír after a talking skull identifies Amalthea's true form. However, Lír is unsurprised and says that he loves whom he loves. This makes Amalthea want to stay human and marry Lír, but Lír thinks otherwise. The Red Bull soon appears, but is no longer deceived by Amalthea's false human form and chases after her. In an attempt to assist her escape, Schmendrick turns Amalthea back into the Unicorn, but she is unwilling to leave Lír's side. The Bull drives her toward the ocean, just as he earlier drove all the other unicorns, but she manages to run away and the bull gives chase. Lír gets between them and blocks the bull's path, but the bull does not stop and Lír is killed.

Out of grief, the Unicorn aggressively turns on the Red Bull and forces him into the sea. Carried on the white surf of incoming tides, the other unicorns emerge en masse from the water, causing Haggard's castle to collapse into the sea as they rush past, with Haggard falling to his death from the crumbling castle parapet, and ultimately joining the Bull in the sea. His last words were proclaiming that he knew Amalthea was the last.

King Haggard is a very destructive and tyrannical ruler who shows many signs of Anhedonia. Things that bring joy to most people have bring him not even a little happiness. He has tried, in the past, to find joy in other things, including his adoption of Lir, but all or his efforts, even his effort to take pleasure in evil itself, soon die. His depression extends to his entire household - he sees no value in light, warmth, music, companionship, or good food, and lives more like a hermit than a king. The only thing that lifted his spirits was seeing the beauty of the Unicorns and he selfishly wanted them all to himself. Even THIS pleasure was so foreign to him that the first time he felt it, we was certain he must be dying.

Because of his inability to feel joy, he also has no practical value in other humans, believing them to be expendable unless he can find any use for them. He warns Schmendrick and Molly that "What I forget not only ceases to exist, it never existed in the first place.". He has stated that he would do without his four sentries if possible. He presumably allows Lir to stay with him only to be his successor, since he stated that he stopped loving him before he was six years old. 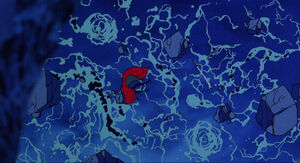 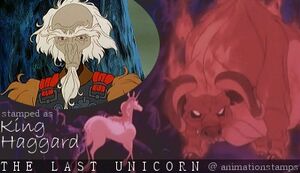 Haggard with his henchman, the Red Bull. 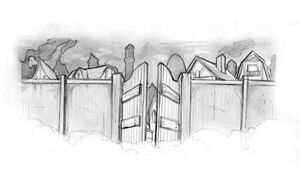 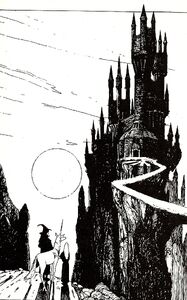 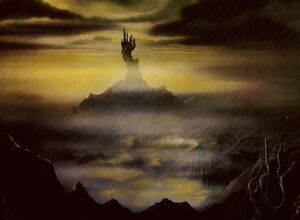