Have his soldier kill Mary and her unborn son (failed).

King Herod, also known as Herod the Great is the overarching antagonist of Sony Pictures Animation's 2017 feature film The Star. He is the evil Roman-appointed king who rules over the land of Israel and the master of the Hunter.

He was voiced by the late Christopher Plummer, who also played The Grand Duke of Owls in Don Bluth's Rock-a-Doodle, General Chang in Star Trek VI: The Undiscovered Country, Ralph Nickleby in Nicholas Nickleby, Barnaby in Babes in Toyland, 1 in 9, Arthur Case in Inside Man and Charles F. Muntz in Disney/Pixar's Up.

Herod was first seen when the three wise men and their camels named Felix, Cyrus and Deborah, arrive at his palace. The wise men revealed their gifts of gold, frankincense and myrrh, but when they reveal that it is for the "new King", he sends them on their way to meet him and give him his blessing.

However, as the three wise men leave, Herod secretly sends the Hunter and his two dogs Thaddeus and Rufus to find and kill the newborn, believing that the newborn might threaten his legacy as a great ruler; even Felix, Cyrus and Deborah overheard this and decided to ensure that Herod's plan must be stopped at all costs.

The Hunter and his dogs tracked Mary and Joseph across the country, eventually finding them in Bethlehem. Before the Hunter could accomplish the goal, the couple's pet donkey Bo gets the camels and a flock of sheep to attack the Hunter and the dogs, sending them hanging for life on the edge of a cliff. The Hunter attempts to drop both Thaddeus and Rufus to save his own skin, but Bo rescues them while the Hunter ends up falling to his death, leaving Herod's plans in vain.

During the credits, Thaddeus and Rufus are shown rejecting Herod after their rehabilitation, seeing now that he was only using them. It's completely unknown what happened to Herod afterwards, but according to Biblical canon, Herod died just a few years later, so it's safe to assume that this Herod suffered the same fate. 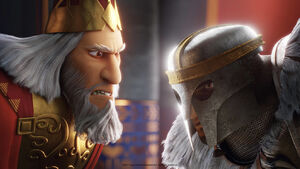