Weapon of the Alien Pedan

King Joe is a giant alien robot that has appeared as a recurring antagonist in the Ultraman franchise.

It first appeared in episodes 14 and 15 of Ultraseven, where it was sent in by the Alien Pedan to attack the U.N. Embassy, where a scientist had discovered a chemical that was penetrable against Pedantic Armor. Ultraseven soon arrived to fight the robot, but King Joe initially overpowered the Ultra. However, as soon as King Joe's back was turned, Ultraseven attacked King Joe from behind and knocked King Joe onto the ground. King Joe then split into four ships and retreated.

King Joe later attacked some oil tankers in the Tokyo Bay. Ultraseven arrived again to fight off the giant robot. It was destroyed when the Ultra Garrison fired the reactive chemical at King Joe, causing it to explode. The Pedan's ship then rose out of the wreckage but was destroyed by Ultraseven's Wide Shot.

King Joe appears in episode 14. After Zetton was destroyed by Ultraman Max and Ultraman Xenon, Alien Zetton sent down four fighters that formed to make King Joe. Piloted by a brainwashed Natty, King Joe caused havoc, prompting Ultraman Max to go and fight it off. After using the Max Galaxy to free Natty from inside the robot, Ultraman Max destroyed King Joe with the Maxium Cannon.

An upgraded version of King Joe called "King Joe Black" appeared as a secondary antagonist in the series. It killed several monsters throughout the series before coming across Rei and ZAP SPACY. Rei attempted to fight off King Joe Black with his monsters but they were unable to get through King Joe's near-impenetrable armor and thus were forced to retreat.

King Joe later reappears in the finale during the battle between Rei's Gomora and Kate's Zetton. It attacked Zetton but was impaled by Gomora EX's tail. It later reappears when it attempts to stop the Pendragon from leaving the planet only to be defeated and destroyed by a revived Ultraman.

King Joe Black appear in episodes 10 and 11 of the series, where they are revealed to be Mass Production Models produced by the Alien Pedan for the purpose of exterminating any beings who carry the Reionyx genes. They were sent after ZAP SPACY but were destroyed by the Pendragon's "Pedanium Launcher".

King Joe appears as a member of the Belial Army. It fought Ultraseven alongside Fire Golza, Eleking, Verokron, Doragory, King Pandon, Banpira, Alien Guts, Alien Metron, and Gan-Q. It was later called back by Ultraman Belial and sent out later to take on Ultraman Zero, only to be destroyed by Zero's Zero Slugger Attack along with Alien Valky, Alien Guts, Fire Golza, Zetton and Tyrant. 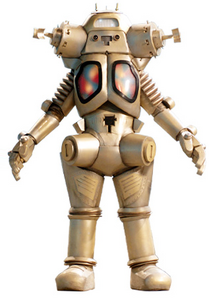 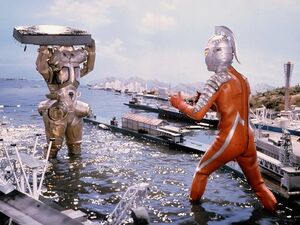 King Joe battling Ultraseven.
Add a photo to this gallery
Retrieved from "https://villains.fandom.com/wiki/King_Joe?oldid=4083446"
Community content is available under CC-BY-SA unless otherwise noted.