Remain the ruler of Pridemoor Keep.

King Knight is a major antagonist in the indie video game Shovel Knight, as well as the main protagonist of the prequel DLC Shovel Knight: King of Cards. He works for The Enchantress as one of the eight members of the Order of No Quarter. He is encountered by Shovel Knight at the end of Pridemoor Keep.

When the Enchantress was starting her reign of terror, she created a small team of eight knights known as the Order of No Quarter. One of the members was King Knight.

Prior to the events of Shovel of Hope, King Knight was a peasant still living with his mother in the homestead obsessed with the idea of becoming a King, and developing an interest with Joustus after hearing that whoever defeats all three Joustus Judges; King Pridemoor, the Troupple King and King Birder, would win an incredible treasure, and be crowned King of Cards. To enter the competition, he defeats Specter Knight in a battle, who he gives a regular Joustus Deck.

As the story progresses and the judges are defeated, the "Glidewing" slowly gains more followers who join King Knight's cause, until it's revealed that King Birder is just a normal Birder and that the Joustus tournament was a scheme done by the enchantress to get people distracted while she created an army of knights.

Disillusioned with the promises of riches being false, he goes to the tower of fate alongside the "Glidewing" crew to face the Enchantress, who tries to persuade him into joining her cause. King Knight refuses it initially, and fights her and The Grand Triumvirate, a giant made of gold that had all the powers of the Three Kings combined by forcing the Three Kings to force against their will. After defeating the latter, the resulting explosion liberates the kings, but left all of King Knight's allies hanging on the wall of the tower.

King Knight is faced with two options, he can help his friends who are hanging for dear life under his feet, or he can join the Enchantress to become a King and abandon his friends, the latter which King Knight starts considering seriously. King Pridemoor tries to reason with him, but while doing so, he irritates King Knight by mentioning what would she think of him, resulting in him deciding to send everyone off the tower, thus joining the Order of No Quarter. Out of spite, almost immediately, he declares to destroy all Joustus cards, so he can be the only king of the game.

King Knight's campaign ends with him ordering to renovate the castle and everyone hating him, including King Knight's mother who walks away disgusted by what King Knight has become. The loss of his mother's support affects him emotionally, as shown in Shovel Knight Showdown, where he asks if she's proud of him in one of his win quotes.

In Specter of Torment, he is shown to be the only member that doesn't need to be recruited. However, Specter Knight notices that he's delaying the renovations of his castle, prefering to dawdle and play at nobility, and forces the king to fight to put him back on the schedule, with Specter Knight winning the battle.

Regardless of what Shovel Knight chooses to do, they are all shown in the epilogue during the credits, with some of them reforming and others paying for their actions. After Shovel Knight and Shield Knight defeated The Enchantress, the real king of Pridemoor Keep returns along with all his subjects, King Knight became a lowly servant and was forced to clean his floors.

King Knight appears in Super Smash Bros. Ultimate as a primary shield-type spirit, with his ability able to increase the user's weight. He can be obtained by scanning the King Knight amiibo, or by defeating him in a spirit battle, which is against King K. Rool with a Star Rod and increased power to dash attacks on the Mushroom Kingdom U stage. 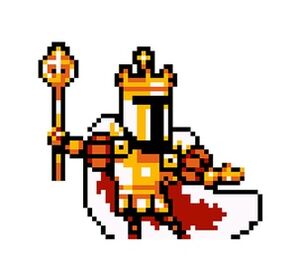 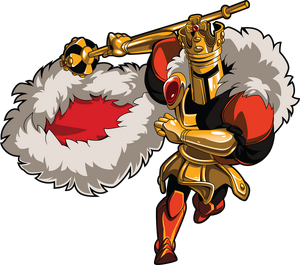 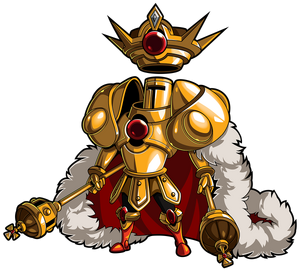 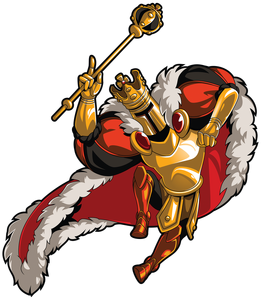 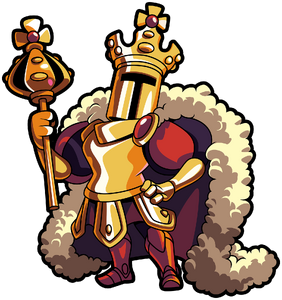