King of the Koopas

Stealing treasure (as the Ogre King).

Kidnap Ojīsan and Obāsan in exchange for Princess Peach marrying him.

King Koopa, also known as Bowser, is the main antagonist in all three shorts in the Japanese-exclusive Super Mario anime series, which have him taking on the roles of various fairy tale villains.

He was voiced by Masaharu Satō.

Once apon a time, there was an old elderly couple (played by Hammer Bros.) who had a granddaughter (Peach). One day, the granddaughter is kidnapped by an evil ogre (Bowser) and his underlings (Koopalings). While the grandparents grieved for their abducted girl, a peach falls from the heavens. In it was a boy named Momotaro (Mario) who was taken in and raised by the grandparents. When Momotaro hears of the story of the kidnapped girl. he sets out to the Island of Ogres to rescue her. The grandmother gives Mario a gun that has been handed down from generation to generation and a lunch comprising of mushrooms. On his way, he befriends allies (Parabeetle, Boomerang Bro, Spike) who have a grudge against the Ogre and offer to help Momotaro. Once there, Momotaro storms the castle and does battle with the Ogre, defeating him and tying him up at gunpoint(!). The girl is freed and the good guys are rewarded with the Ogre's treasure.

One day, Mario sets out on his own, making a little boat and sailing off to the world unknown. When Mario reaches the city, he encounters a beautiful girl named Peach and becomes her companion. One day, they are confronted by Bowser, who decides to harass Peach. Mario defends Peach, but gets eaten by the Kuppa. What Bowser doesn't know is that Mario has a needle/sword and pokes at Bowser's stomach. The excruciating pain causes Bowser to spit out Mario. Bowser runs off as Peach and Mario laugh mercilessly. Suddenly, Peach obtains a Magic Mallet that Bowser has dropped, and wishes for Mario to grow to normal size.

One day, Bowser looked in the mirror and, seeing Peach chosen, he decided to kill her. He first tried to capture her by sending enemies. Wandering through the forest, Peach encountered Mario who fought them and decided to take Peach to seven Kinopios (Toad). But one day, as the seven Toads went into the woods, Bowser disguised himself as an apple merchant, and Peach, while eating one that was poisoned, fell into a deep sleep. The Toads on their way back saw Peach and thought she was dead. They put her in a coffin, and that's when Mario arrived and made her drink the magic potion. Thanking them, she told what Bowser had done and furious, they went to fight him. They defeated Kuribos (Goomba) and attacked Bowser but Mario was stressed because Bowser was going to kill Peach. However, Luigi landed a surprise big hit on Bowser and the two brothers smashed the mirror and killed Bowser. And so everyone lived in peace. 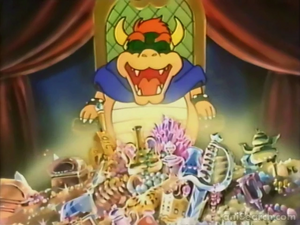 Bowser as the Ogre King sitting on his throne with his stolen treasure. 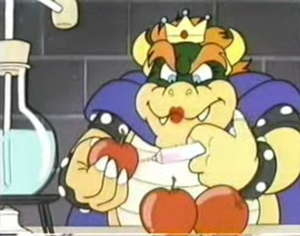 Bowser as the Evil Queen injecting poison into the apples.