King of the Koopas (formerly)

Finish preparations for his and Peach's wedding.

Cheer up Princess Peach and please her.
Turning the inhabitants of Mushroom Kingdom into objects.

Forcing the Princess Peach to marry him (both abandoned).

The attempt consists of turning its inhabitants into inanimate objects, even turning Princess Peach's fiancée Haru-ōji/Prince Haru into a dog named Kibidango. Unlike in the game, Bowser also strives to marry Princess Peach, marking the first time any incarnation of Bowser ever had romantic feelings for her.

He was voiced by Akiko Wada.

In the opening of the film, Bowser emerges from Mario's television in pursuit of Princess Peach. Both Mario and the Princess attempt to hold Bowser off, but Mario is easily swatted aside and Peach is captured and dragged back through the television, soon taken back to Bowser's castle.

Partway through the film, Bowser attempts to convince Peach to love him, and she tricks him into using his shapeshifting to transform into various different forms, only to lock him in a chest once he takes the form of a teddy bear. However, Bowser angrily transforms back to his normal self, escaping the chest, and locks Peach in her room.

The next day, Bowser and Peach's wedding commences, much to the latter's dismay. As Bowser anticipates Peach to say "I do", he spots Mario, Luigi, and Kibidango outside the window, and grabs Peach, telling the minister Shishi that they will continue the wedding uninterrupted in the next room. Bowser attempts to present an oversized wedding ring to Peach but ends up watching in horror as the castle starts falling apart due to the flooding Luigi accidentally caused.

Bowser rises from the ruins of his destroyed castle with the Princess in his grasp and begins beating down on Mario after he consumes the Mushroom and the Flower power-ups, prepared to kill him with his next move. Peach begs Bowser to spare Mario, even offering to willingly marry him, although, while considering this, Bowser decides that it is more important to destroy Mario before he regains the Star and overthrows him.

Bowser then crushes Mario with his foot. However, thanks to Luigi returning the Star to Mario, he gains super strength and pummels Bowser, throwing him away into the distance. Bowser's spells over the Kingdom are then undone, and Princess Peach (to Mario's immense disappointment) is reunited with Prince Haru. During the final scene, Bowser and three of his minions are found working in Mario's Grocery Store. 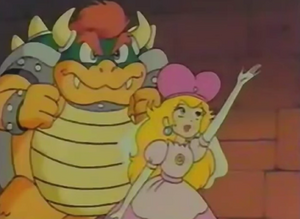 King Koopa with the Princess Peach at their wedding. 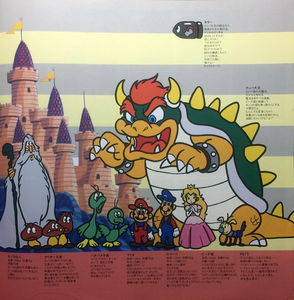 A size comparison between King Koopa and other characters in the movie.