King and High-Priest of the Order of Zugzwang

Sitting on their throne.

Rule the world alongside Grandmaster Nimzo.

King Korol, also known as "God-King Korol" or simply "Our Dear Leader", is one of the main antagonists and a prominent boss from Dragon Quest V.

It was the founder and leader of the Order of Zugzwang, a religious cult who seeks to create the "Crocodilopolis" to save everyone from the oncoming darkness. However, the cult is actually a front for the forces of Nadiria, controlled by Grandmaster Nimzo to invade the human world. King Korol oversaw for years the construction of the temple of Crocodilopolis atop Mount Azimuth, using enslaved humans to construct the temple over a demolished shrine. After the temple was concluded, many of the slaves were disposed of in order to hide their tracks, while the rest was brainwashed to serve the order.

The player reaches Crocodilopolis after restoring the Zenithian Dragon, finding the statue of his wife and a monster impersonating his mother. After defeating the monster, he invades the temple and confronts Korol. Upon being defeated, Korol pledges for Nimzo to help them, but Bishop Ladja appears and told Koral that he is just a figurhead priest, Ladja than cast Kafrizzle to incinerate King Koral as he is no longer useful to Nimzo anymore.

They appear as an obtainable monster for the first time in Dragon Quest Monsters: Joker 2 Professional. Only released in Japan. 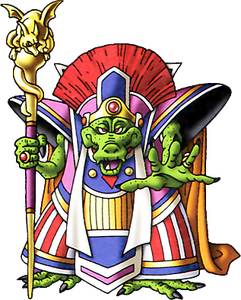 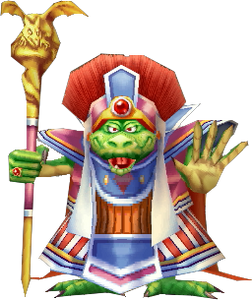 Retrieved from "https://villains.fandom.com/wiki/King_Korol?oldid=3528529"
Community content is available under CC-BY-SA unless otherwise noted.