Ruler of the Submen (formerly)
Conqueror of Earth (formerly)

King Kull is a supervillain in the DC Comics universe. He is an enemy of the following superheroes and superhero teams: Captain Marvel, the Marvel Family, the Justice League of America, the Justice Society of America, the Squadron of Justice, Stargirl and Cyclone. King Kull is an intelligent and brutish caveman who was formerly the ruler of Earth. He survives into the twentieth century due to suspended animation after he faked his death and tries to destroy the Earth. However, he is always defeated by Captain Marvel and other superheroes.

Other versions depict King Kull that he was present throughout human history and tried to prevent the spread of democracy. King Kull is apparently based on the Bogeyman and other types of mythical monsters. His first appearance was in Captain Marvel Adventures #125 from October 1951. King Kull has also been a member of the Monster Society of Evil.

King Kull appears during prehistoric times, which was around 28,000 BC, and he is the ruler of the Submen. They were a both brutish and technologically advanced race that had conquered humanity. They would continue to rule over hem until humanity revolted against King Kull and the Submen and were overthrown. Due to humanity greatly outnumbering them, all of them are killed except King Kull. He fakes his death with a bomb and continues living in a cavern while in suspended animation. Around the twentieth century, an earthquake occurs near his location and he awakens. King Kull then plans to destroy Earth but is defeated each time by Captain Marvel or the Marvel Family. Some examples are the time he released the Seven Deadly Enemies of Man and used Sin bombs to destroy Earth and another was when he tried to Billy Batson into stone.

Meanwhile, King Kull selects several supervillains from the three earths, Penguin, Queen Clea, Blockbuster, and Ibac for his Earth-2 attack, where he tries to destroy Atlantis and use a cloud to sink multiple islands. For Earth-S he recruits the Earth-2 Joker, the second Weeper (DC), Doctor Light and the Shade, who trap one side of the world in light and another in darkness, and try to convert people into different materials. For Earth-1 he picks the two supervillains Mister Atom and Brainiac, who attack the city of Tomorrow, and increase the Earth's rotation to send people into the air. King Kull's ultimate goals in all of this chaos is to attempt to exterminate humanity on all three Earths in order for his people to rule once again. However, the supervillains get defeated, and the superheroes then head towards to the Rock of Eternity, with Superman leading the assault. King Kull is able to turn Superman against the other allied super heroes using a Red Kryptonite which fills Superman's mind with rage and makes him invulnerable to green kryptonite until he is eventually defeated after Captain Marvel knocks him out. Jr. then destroys the Red Kryptonite, Mary frees the Elders, and Cap uses his lightning to restore Superman's mind. King Kull was later imprisoned with magic chains that supposedly even Hercules could not break, and the heroes returned to their own worlds. King Kull would escape, however, and become a frequent member of Mister Mind's Monster Society of Evil. During one of their plans, King Kull would participate in the attack on the Rock of Eternity with the support of an army of 247 planets but would be defeated along with the other evil-doers.

In Captain Marvel Adventures #3, a supervillain similar to King Kull, known as the Beast-ruler, is shown when he is created by Doctor Sivana with a humanoid body and animal qualities, such as the strength of a gorilla and the cunning of a fox. However, Sivana's creation betrays him and attempts to attack humanity with an animal army. His reasoning is that he greatly despises man, despite his similar appearance, and plans to make animals rule the Earth. Captain Marvel responds to this threat and leads an army of his own animals against the Beast-ruler. The Beast-ruler gets thrown over a waterfall in a climatic fight with Captain Marvel.

In Whiz Comics #7 a race of prehistoric men who have been frozen for thousands of years at the North Pole make their only appearance. They are apparently strong enough to survive a bazooka shell and have super intelligence. Explorer Rodney Stark would discover them and planned on bringing them back to life, with the evil intent for using them to build an air force, copies of stolen U.S planes, which would allow him to take over the world. They are all destroyed in an explosion along with Stark when Captain Marvel makes their planes crash.

King Kull makes his appearance twenty years later in the fifth issue of Justice League: Cry For Justice. He battles Stargirl and Cyclone as part of a plot orchestrated by the supervillain Prometheus (DC) in order to keep Earth's superheroes occupied and distracted so that he could plant massive teleportation devices in various cities on Earth.

King Kull appears as one of the supervillains that is a member of the Monster Society of Evil in the Scooby-Doo Team-Up Vol 1 #16 "Simply Marvelous". He battles the SHAZAM! (Marvel) Family and Mystery, Inc. but is later defeated.

In the Batman: The Brave and the Bold episode "Menace from the Conquering Caveman!", a supervillain known as Kru'll the Eternal (voiced by Michael Dorn) has similarities to King Kull and Vandal Savage. In the episode, Kru'll explains that during his past he was a caveman who was affected by a meteorite that granted superhuman strength and immortality. Throughout history Kru'll would become a powerful dictator several times but his empires eventually collapsed. By the modern day, Kru'll fought Batman and Booster Gold, and attempted to use Skeets alongside the same meteorite that gave him his powers to do the same to a group of his associates. In the end Kru'll was defeated. Kru'll would later still live on into the 25th century, in which he eventually 'clashed' with Michael Jon Carter, before becoming Booster Gold, after having his coffee spilled on Kru'll's suit. Kru'll would later appear back in the present in the episode "The Malicious Mr. Mind" as a member of the Monster Society of Evil and battles against the Marvel Family and Batman but gets defeated.

King Kull fights the JLA, JSA and the Squadron of Justice in Justice League of America #135 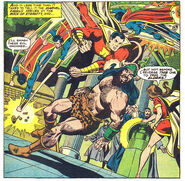 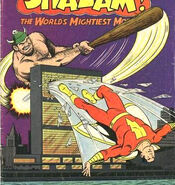 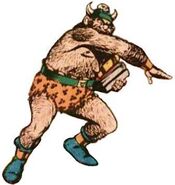 Kru'll, similar version of King Kull, in Batman: The Brave and the Bold

Batman Team Up With The Marvel Family