King Leo, referred as "The Real King Lion" (in Japanese: 真・獅子王, Shin Shishiou) in Japan, was the main antagonist of the Savage Reign series and a boss in Neo Geo Battle Coliseum.

In the past King Leo was known as a legendary fighter, which disappeared in the shadows because he easily defeated anyone who dared to fight him. After some time, he returned and announced the Battle of the Beast God tournament in order to fight worthy and strong opponents.

Without knowing, King Leo raised an impostor of him named King Lion, which tested and defeated most of challengers, but after the defeat of the latter Leo appeared and challenged Hayate into deadly fight, however he ended up defeated. He later fought with Jyazu but was defeated again.

In Neo Geo Battle Coliseum he appeared as one of the bosses alongside Neo Dio, Mizuchi and Goodman.

King Leo is overconfident and prideful, he believes to do anything and his desire to win was strong enough to let him fight with Jyazu even when he suffered fatal wounds from Hayate.

King Leo fights with his broadsword and boxing, he is able to sense the presence of his opponents and create hurricanes and thunderbolts in order to attack them. 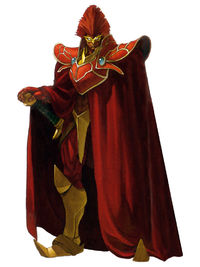 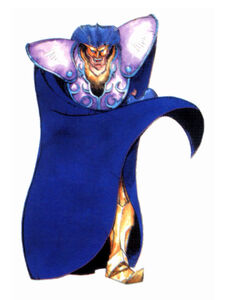 King Lion, his imposter.
Add a photo to this gallery

Retrieved from "https://villains.fandom.com/wiki/King_Leo_(Savage_Reign)?oldid=3538510"
Community content is available under CC-BY-SA unless otherwise noted.