Have a great game of soccer for his fellow subjects (succeeded).

Retrieve the Star of Astroroth (failed).

King Leonidas is the secondary antagonist of Disney's 1971 film Bedknobs and Broomsticks. He is an anthropomorphic lion who rules the uncharted island of Naboombu as it's king.

He was voiced by the late Lennie Weinrib, who also played Secretary Bird in the same film.

According to an old book, it was told in ancient times that a wizard named Astoroth spend his last years in an uncharted island called Naboombu experimenting his spells and powers on animals in cages to make them more like humans. The animals would later break free of captivity before killing Astoroth and stealing all his powers to create a society of their own. It is also implied that Leonidas was given the Star of Astoroth (containing the Substitutiary Locomotion spell) as a medallion by his family following his coronation as the new King of the island, saying that his family had owned the Star for generations ever since Astoroth's death.

Leonidas is also shown to throw a temper because of an incoming soccer game being cancelled since there is no one to volunteer for a referee. He also holds a hatred toward humankind as he puts up a law saying "No Peopling Allowed", possibly due to the animals' hatred towards Astoroth for confining their ancestors in cages and performing his experiments on them. However, it wasn't the case when five humans (Miss Englantine Price, Professor Emelius Browne and three orphans named Carrie, Charles and Paul Rawlins) arrived to the island to search for the Star after escaping the Bookman and Swinburne. Upon learning of Leonidas' problem from Secretary Bird, Browne willingly offers to fill himself as the volunteer referee for the soccer game, even coming over to Leonidas' tent in person to discuss it with him. Upon hearing of this, Leonidas became so delighted that he agrees to set aside his hatred of humans to ensure that everything goes well in the game, even allowing Price and the children to sit on his throne during the game. With that in mind, as the game starts, Leonidas leads his team into getting a shot, despite the rival team's efforts in stopping them. However, one of the players (a rhino) accidentally pops up the soccer ball with his horn, causing the angry Leonidas to let out an extremely loud roar that sends Mr. Browne and all of the team players (including the rival ones) into one of the soccer's nets before blowing the ball into the net to win.

Thanking Browne for helping out, Leonidas cleans him up before bidding goodbye to him, along with Price and the children. However, upon discovering that the Star has been exchanged for the referee's whistle, Leonidas flies into a rage and pursues the humans, intending to kill them. In a desperate attempt to escape, Price uses a spell to turn the fearsome lion into a long-tailed rabbit, much to his discomfort. With nothing else to do, a defeated Leonidas hops back to his kingdom, but the Star disappears after the humans return back to their world as it turns out that it is actually impossible to take an object out from the fantasy world. Fortunately, Paul found out that the Star and its spell were already written in a book detailing about the island of Naboombu, which Price uses to bring numerous knight armors to foil a Nazi invasion led by Colonel Heller.

It is unknown what has happened to Leonidas afterwards, though it can be presumed that he would revert back to his original lion form since the spell is temporary and he would still be ruling his kingdom.

Leonidas is proud, arrogant, manipulative and egotistical. Even though he is not completely evil, he is very sensitive, cunning, destructive and temperamental, Leonidas possesses a deep love for the game of soccer, as seen when the royal championships on his island could not continue when a suitable referee could not be found anywhere. He is also extremely violent, ferocious, aggressive, and obstreperous when he roars so loud at everything that moved. He is also shown to be very popular, praiseworthy and straightforward with the rest of the animals, as he wants to put a good soccer game to entertain them, much to their delight.

Leonidas is also shown to be hateful towards humans in general due to the animals' hatred towards Astoroth for experimenting on their ancestors, even wrote a law forbidding any humans to set foot on his island. However, he is willing to put aside his hatred of humans after hearing that Browne is willing to fill in as referee for his soccer game, much to his delight; even when Brown gets injured by the players, Leonidas assures to him that he's doing okay for the job and has him taken care of after the game is over.

King Leonidas' voice is quite powerful, which can be expected from a royal lion. His yell to "stop that ball" is powerful enough to blow everyone away to the net from its hurricane-like force. Like the other animals of the isle, he has the persuasive power of speech (with a Boston/Irish accent) and other human attributes due to Astoroth's spells. 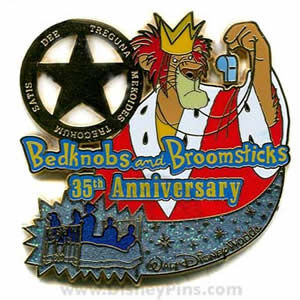 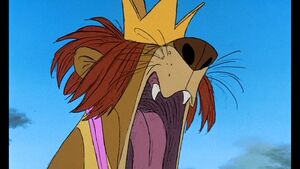 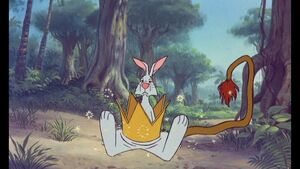