King Louie, the King of the Bandar-Log

The enigmatic King of the Bandar-Log monkeys
Prehistorical Gigantopithecus

Lounging about in the Bandar-Log, manipulating others

Master Manipulator / Power Hungry / Monarch / Ape
King Louie (or simply Louie) is the secondary antagonist in the 2016 Disney live action film, The Jungle Book, a remake of the 1967 animated classic. He is a humongous Gigantopithecus who wants Mowgli, being a "Man", to get for him the "Red Flower", which is fire, so he can grow as powerful as man.

He first appears in his temple when several of his followers kidnapped Mowgli and brought him over. After a brief introduction, Louie offers Mowgli protection from the evil tiger Shere Khan, and in return, he expects Mowgli to be his minion and build the red flower from fire, as part of a plan to take over the jungle. However, Mowgli doesn't know how to make fire, and Louie, who realizes that due to his protests, quickly gets mad on Mowgli, who manages to escape with the help of Bagheera and Baloo. The mad Louie sends a spy to find them, and when the spy eventually finds them, Louie orders the trio to be captured. He later corners Mowgli, informing him that Shere Khan has killed Akela, and offers to spare him if he stays and serves him and his plans. However, Mowgli refuses and tries together with Baloo and Bagheera to escape once again.

Louie chases Mowgli though the temple but ends up ruining into all of the pillars by accident and gets heavily buried, while Louie's Banbar-log monkeys work on digging him out, Mowgli and his friends escape the ruins.

During the credits King Louie is shown to have survived as he pops out of the rubble, while Louie starts his song again, he accidentally knocks out another pillar that his minion monkeys just finishes rebuilding. However, this maybe only for the credits, as Shere Khan(who also died in the movie) is shown too, so King Louie's true status is unknown

This incarnation of King Louie is more sinister and villainous; though he can be suave, polite, charming and somewhat friendly, he can become impatient, spiteful, aggressive and menacing within moments, especially when things don't go his way. 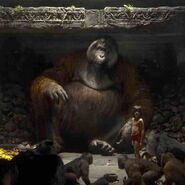 King Louie ordering the monkeys to seize Baloo
Add a photo to this gallery
Retrieved from "https://villains.fandom.com/wiki/King_Louie_(2016)?oldid=1483155"
Community content is available under CC-BY-SA unless otherwise noted.