Remain the ruler of Malaria (failed/formerly).

Keep lying that anyone needs to be evil to survive and kill Igor (failed).

King Malbert (also simply known as Malbert) is one of the two main antagonists (alongside Dr. Schadenfreude) in the 2008 rendered 3D film Igor by MGM. He is the greedy, selfish, tyrannical and manipulative king of Malaria. He also has Royal Guards, and hides the truth from the townspeople. He is the only person that Dr. Glickenstein would open his door to. He is Igor's archenemy.

He was voiced by Jay Leno, who also played the Nega Chin in The Fairly OddParents. In the videogame adaptation of the film, he was voiced by David W. Collins.

The Kingdom of Malaria's environment is devastated by a mysterious storm. King Malbert then blackmails the rest of the world to pay the town not to unleash the various doomsday devices invented by its Evil Scientists. In turn, they are assisted by the hunchbacks, while Malaria's annual Evil Science Fair showcases the scientists' latest weapons. However, Igor (who serves the somewhat tedious-minded scientist named Dr. Glickenstein) is a talented inventor who aspires to be an Evil Scientist himself. Among his inventions are his friends named Scamper and Brain.

When the malfunctioning invention explodes and decimates Dr. Glickenstein, Igor sees his chance. With Brain and Scamper's help, he assembles a huge, monstrous being from human remains. However, when he brings her to life, he discovers that the "Evil Bone" he gave her was not activated, making her kind, sweet, gentle, friendly, thoughtful, demonstrative and feminine. Igor tries to convince her that she is extremely evil, violent and villainous, inadvertently naming her "Eva", while an attempt to brainwash her into becoming evil by bring her to a brainwashing salon where anybody hocked into a machine where your shown monster movies for a couple of hours. Brain also gets the same thing in order to watch TV, but has taken the remote for Eva's room and every time time he tries to change the channel on the television in Eva's room changes.

This turns the television onto the 1982 movie Annie, and when Eva gets out, she can now speak English and has a love for being an actress, so Igor takes her back to the castle to be destroyed in the car. On the way back to the castle, Dr. Schadenfreude and his vain girlfriend named Jaclyn try to steal Eva by using a shrink ray to shrink them all, but instead get themselves struck. Igor decides to exhibit Eva at the science fair anyway, telling her that the fair is an "Annie" audition.

Igor's nemesis, Dr. Schadenfreude learns of Eva's existence and attempts to steal her, but when that fails, he exposes Igor to King Malbert, who sends Igor to an "Igor Recycling Plant". Dr. Schadenfreude activates Eva's Evil Bone and unleashes her into the Science Fair, where she destroys all of the Evil Inventions. Scamper and Brain help Igor escape from the recycling plant and they learn that Malbert had deliberately killed Malaria's crops with a weather ray that made storm clouds, so he could implement his "Evil Inventions" plan, thereby keeping himself in power. Rushing into the arena, Igor reasons with Eva to deactivate her Evil Bone and allowing her to regain her extremely sweet and attractive personality, while Scamper and Brain deactivate the weather ray, which immediately falls and crushes Malbert to death.

Dr. Schadenfreude literally attempts to take power, but the citizens revolt upon learning of Malbert's deception. After that, Jaclyn then tries to become the guards new boyfriends, but sees that her voice is cracking, so because of this she tries to get another pill only to see that she is all out. After this, Jaclyn's voice continues to become more cracked as we pan up Jaclyn transforms into Heidi. The monarchy has been dissolved and Malaria normally becomes a republic, with Igor as president. Dr. Schadenfreude is relegated to a pickle salesman, while the annual Science Fair is now an annual musical theater showcase, and Igor and Eva are planning on making a dog, or adopt one.

King Malbert is very oppressive, temperamental and manipulative. He is portrayed to be the selfish king of Malaria. He is also extremely persuasive, calculating, unscrupulous and materialistic, as he supposedly keeps lying that anyone needs to be evil to survive. He is also shown to be very argumentative, opprobrious, defamatory and vituperative towards his guards, as he yelled at them "Silence!". One of his most despicable plans is when he sends his guards to take Igor into the "Igor Recycling Plant". Despite his tyrannical nature, Malbert can also be fearful when he faces his weather ray falling down to himself. 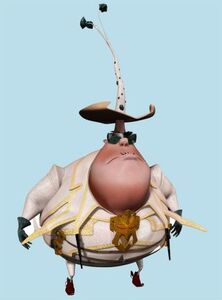 King Malbert's final moments before being crushed by his weather ray by Scamper and Brain.
Add a photo to this gallery 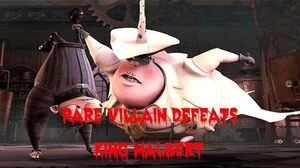