Judge of the Damned

Tentacle-like appendages
Can smell the sins of others

Judging and tormenting the spirits of the condemned.

King Minos is a major antagonist in the videogame Dante's Inferno, serving as the second major boss in the game. He was the temperamental, sadistic, and cynical judge of the dead, residing over Limbo.

He was voiced by Richard Moll in the game and in the animated movie, he was voiced by Kevin Michael Richardson, who also voiced Phlegyas, but was limited to grunts and roars in that role.

After his time as the former ruler of the Greek kingdom of Crete and his death, King Minos became the judge of those that were sent to Hell, using his sense of smell to sniff out the ins of those sent to him in Limbo. He would then place them on a large bladed wheel and press a button to spin it, sending them down into the circle of Hell where they belonged.

After arriving in Limbo, Dante saw Minos off in the distance, crying out the Sins of the ones he judged. Eventually he arrived at the king's location, just as he was judging a suicide to the Circle of Violence. The blind Minos smelled Dante and asked who had come into his house of pain, to which Dante replied he was one who loved Beatrice and demanded to know where to find her. Minos said that he only smelled a traitor, a glutton, and a murderer, but the crusader told him to sniff again. The judge became angered that Dante dared to speak with him and attacked the crusader. Dante managed to defeat Minos by impaling his tongue on his bladed wheel, then activating it, slicing his face in two.

King Minos possesses great strength due to his large size and even though he is blind, he is able to smell the Sins of other Souls, seemingly able to use this as a form of sight. He possesses tentacles with large bladed points and is able to send them up through the ground to strike at Dante. Minos is also able to use his breath as a weapon, as it can create a powerful gust of wind. King Minos can also lash his serpentine tongue at his foes as well. 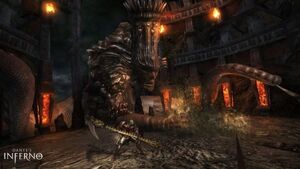 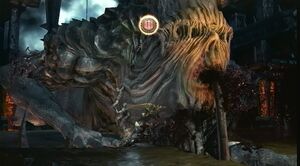 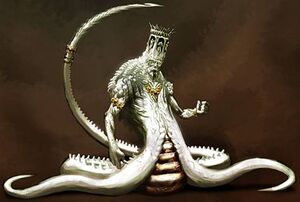