King Mondo (simply known as Mondo) is the leader/king of the Machine Empire and the main antagonist of Power Rangers Zeo, as well as a minor antagonist in Power Rangers In Space. He is the archenemy of Rocky DeSantos, the Zeo blue Ranger. He is very uptight, very distinguished and very evil and is the most feared by the Zeo Rangers.

King Mondo lead his Machine Empire to the Moon, where they drove out Lord Zedd and Rita Repulsa. He believed that Earth would be an easy conquest, but was surprised when the Zeo Power Rangers defeated a squad of his Cogs. However King Mondo was intrigued by this more than he was angered, since all of his previous conquests had been boring and too easy and these Power Rangers actually proved formidable.

Many years later, General Venjix, the leader of the remnants of the Machine Empire, still looked up to his former King as a living god over creation. Before his destruction, he was sad that he failed his King years after the Machine Empire fell. King Mondo is mentioned by Venjix, also he shows to his minions a statue of him. 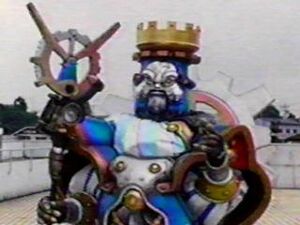 Retrieved from "https://villains.fandom.com/wiki/King_Mondo?oldid=3267281"
Community content is available under CC-BY-SA unless otherwise noted.