Take over the world (succeeded).

Kill every martial artist, so that no one can stop them.
Kill Goku.

Martial Artists
King Piccolo's Demon Clan is a Demon Clan led by the Demon King Piccolo and comprised of his children. They are the main antagonists of the King Piccolo Saga and Piccolo Jr. Saga in Dragon Ball.

The clan was founded by King Piccolo on Earth after he was split apart from the Nameless Namekian. The clan was comprised of Piccolo's spawnlings.

They fought with the students of the Mutaito Training Academy including a young Master Roshi and Master Shen. The clan was temporarily dissolved when Master Mutaito sacrificed his life to seal King Piccolo in an Electric Rice Cooker via the Evil Containment Wave.

King Piccolo and his clan at first had an alliance with the Pilaf Gang, who allowed them to use their airship and technology to locate the Dragon Balls and to hunt down all of Earth's top martial artists.

However, after successfully obtaining his youth, the Demon Clan betrayed the Pilaf gang. The clan would go on to annex King Furry's castle in Central City and take over Earth.

However, the clan came to an end when Goku killed King Piccolo. However, right before he died, King Piccolo created his final spawnling, Piccolo Jr. to carry out his legacy and get revenge on Goku. Ultimately though, Piccolo Jr. would became friends with Goku, leaving King Piccolo's legacy unfulfilled. 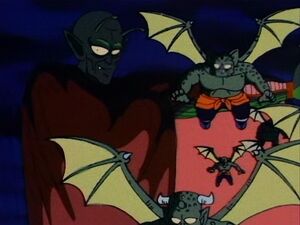