Become immortal.
Destroy or enslave humanity.
Kill Goku and all who stand in his way (all failed).

King Piccolo Daimao is the main antagonist of the 2009 action film Dragonball Evolution.

He was portrayed by James Marsters, who also played Spike in the Buffyverse, Brainiac in Smallville, Zamasu in the English dub of Dragon Ball Super, Faro Argyus in Star Wars: The Clone Wars, Jonah in Marvel's Runaways, and Captain John Hart in Torchwood.

Two thousand years ago, King Piccolo, an evil Namekian warlord, and his right hand Oozaru the Great Ape arrived on the Earth to conquer the planet. The two caused mass havoc upon humanity, nearing driving it to extinction. That was until seven mystics used a powerful enchantment called the Mafuba to seal him away within an urn. As he was banished, Piccolo swore to return for vengeance.

In the present day, Piccolo found a way to escape his prison. With assistance from his servant Mai, he sought the seven Dragonballs to achieve eternal youth. He finds the first Dragonball in a village under the possession of the peasant Seki, slaughtering everyone in his path. Seki surrenders the Dragonball under an offer to spare her daughter's life.

Later, while Goku was at a party held by Chi-Chi, Piccolo invades the home of his adopted grandfather Gohan in search of his Dragonball. After being unable to find it, Piccolo uses his telepathic powers to cause the house to collapse into itself. Once Goku returns to find the house in rubble, Gohan tells Goku to seek Master Muten Roshi before dying from his injuries. Goku then swears vengeance for the one responsible for taking his grandfather's life.

Piccolo and his men then search for the remaining Dragonballs. They eventually obtain four while Goku and his team obtain the last three. Piccolo sends his men out to kill the heroes and obtain their Dragonballs. When that fails, Piccolo uses a cunning trick by having Mai disguise herself as Chi-Chi to seduce Goku. A fight with the real Chi-Chi occurs, and Goku mistakenly battles the wrong opponent, allowing Mai to shoot Goku and depart with the remaining Dragonballs. Gohan revives Goku and the group go out to stop Piccolo.

At the Dragon Temple, Piccolo unites the Dragonballs to begin the summoning process of Shenron the Eternal Dragon, revealing his intention to destroy the planet out of vengeance for his banishment. Fortunately, Goku's team arrive to stop him. Piccolo reveals to Goku that he is Oozaru, sent to the Earth as a baby to destroy it when he got older. The eclipse then begins, turning Goku into Oozaru, who Piccolo orders to kill his friends. Roshi attempts to use the Mafuba on Piccolo, but doesn't have enough energy to finish the enchantment. Oozaru strangles Roshi, but his words manage to snap Goku back to his senses before dying.

Enraged, Goku battles Piccolo in one final showdown, ultimately defeating him with a Kamehameha Wave. Once the ritual is complete and Shenron is summoned, Goku has him bring Roshi back to life.

In a mid-credits scene, Piccolo is revealed to have survived the battle with Goku and is being nursed back to health by Seki.

This version of Piccolo is eviler than his anime counterpart as he lacks any regard for his minions, showing no concern when Mai or his other minions lost, while the anime version at least cared for his sons. He's a genocidal mass murderer who wants to wipe out humanity and shows no remorse for any of his actions such as killing many humans in the past. This version of Piccolo is shown to be extremely sadistic as well, savagely murdering Gohan and taunting Roshi as he was brutally killed by Oozaru.

Piccolo in the film's flashback opening.

Piccolo ordering his monsters and Mai to find the Dragonballs.

Piccolo revealing his intentions of destroying the Earth. 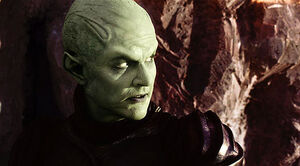 Piccolo shooting a fireball at Goku.

Piccolo being nursed by Saki.