The SpongeBob Movie: Sponge On The Run

Ruler of the Sea

Kidnap Gary and use his slime to get rid of wrinkles on his face (briefly succeeded, later abandoned)

Kill SpongeBob and his friends for stealing Gary from him (failed, later abandoned).

King Poseidon is the main antagonist of Nickelodeon's thirty-third semi-theatrical film The SpongeBob Movie: Sponge On The Run. He is the king of the lost city of Atlantic City.

He was voiced by Matt Berry, who also played Douglas Reynholm from The IT Crowd, The Butt Witch in Twelve Forever and Allen, from Aqua Teen Hyper Force.

King Poseidon is a vain, flamboyant, self-centered monarch whose life mostly revolves around his looks as he believes that his facial features are what makes him a true king. He is also somewhat comedic as he overreacts to one unrecognizable wrinkle on his face in an over-the-top manner. He also had anyone who dare stand up to him executed in a flamboyant stage show.

Long before the events of the movie, King Poseidon became the king of the lost city of Atlantic City. He became extremely focused on his looks in his rise to power and used the slime from sea snails to make the wrinkles on his face go away. When the royal snail ran out of slime, he would discard it and send it down a chute to a snail dungeon, which they would be enslaved.

The SpongeBob Movie: Sponge On The Run

King Poseidon is first seen admiring his looks and talking about them to his Chancellor. Suddenly Poseidon notices a wrinkle on his face and requests his royal snail, so he can use the slime to get rid of the wrinkle. He puts the snail on his face and learns the snail is out of slime. He sends the snail to the dungeon and orders the Chancellor to bring him another snail at once. The Chancellor then informs him the snail population has been depleted. Poseidon then has the Chancellor write a decree for a boon for whoever brings him a snail. The Chancellor sends the decree to Bikini Bottom where it catches the attention of Plankton, who has once again failed to steal the Krabby Patty formula because of SpongeBob. Plankton knows SpongeBob has a snail named Gary, and he helps Poseidon kidnap Gary so Poseidon can use his slime and Plankton can finally steal the formula without SpongeBob getting in the way. After SpongeBob returns to his house and discovers Gary has taken by Poseidon, he and Patrick head over to rescue him.

On the road to Atlantic City, SpongeBob and Patrick watch Poseidon use Gary on his face through the Mirror of Meanwhile.

When SpongeBob and Patrick finally arrive at Poseidon's lounge in Atlantic City, Poseidon thinks they are an act in his show and asks them to perform something. They quickly start singing a song together but suddenly SpongeBob spots Gary near Poseidon and rushes over to him. SpongeBob tells Poseidon that there's been a mistake about Poseidon disagrees and the two of them get into a tug-o war fight over Gary. Poseidon pulls Gary away from SpongeBob and has him and Patrick locked in his dungeon to await trail. Meanwhile back in Bikini Bottom, Sandy, Squidward, Mr. Krabs and Plankton hear that SpongeBob and Patrick have been arrested and are to be executed, Sandy and Mr. Krabs agree to save them. Plankton comes along feeling guilty about having gotten SpongeBob into this mess and Squidward comes along to see Kelpy G perform. The gang quickly drives to Atlantic City in a sandwich car.

Poseidon is later seen over seeing the trail of SpongeBob and Patrick with Gary at his side. Luckily Sandy, Squidward, Mr. Krabs and Plankton arrive just in time to save the day. When Sandy asks Poseidon to let her and the others hear some nice things about SpongeBob, he agrees to let them proceed. Sandy, Patrick, Squidward and Mr. Krabs all share some nice stories about how SpongeBob changed their lives, making SpongeBob so happy. Then thinking quickly, the whole gang performs a musical number for Poseidon and quickly up to his booth and take Gary from him and run away.

Realizing the trick that has been played on him, Poseidon orders his guards to hunt down SpongeBob, Gary and their friends. After a long chase, Poseidon and his guards have the gang surrounded outside. Poseidon then applauds their musical performance and agrees to let the gang go on the condition that SpongeBob returns Gary to him. But SpongeBob refuses, saying he loves Gary too much. SpongeBob then gives praise to his friends for all they did to help him get Gary back, such as defying Poseidon and humiliating him in front of his subjects. Angered, Poseidon raises his trident and prepares to zap SpongeBob and his friends with it. But before he does, SpongeBob says Poseidon would understand if he had such great friends like them. Poseidon gets confused then lowers his weapon and tosses it aside, saying he has all sorts of friends. Poseidon asks the Chancellor for his friend count and to his shock he has zero friends because, despite being so popular, he's always been so selfish and self dramatic all the time over the little things.

Devastated over the fact that he has had no friends all this time, Poseidon starts crying violently. Taking pity on him, SpongeBob offers to be Poseidon's friend, providing he lets him have Gary back, telling him that friends don't steal from each other. But Poseidon says he needs Gary to get rid of his wrinkles. SpongeBob tells him that looks don't matter. Inspired and overjoyed, Poseidon strips down to his true form, giving up his vanity and having a change of heart. He then allows SpongeBob to have Gary and has all the snails set free. 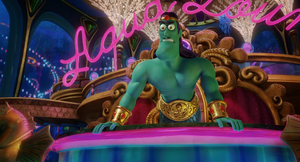 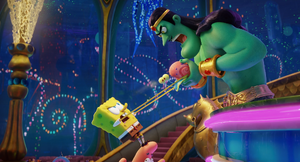 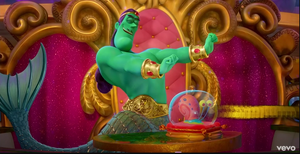 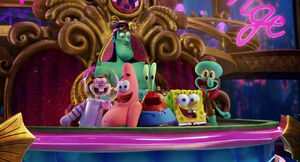 "The secret to the gormula is you!" 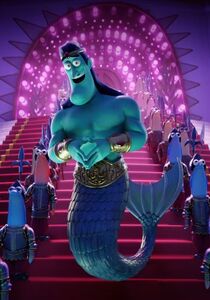 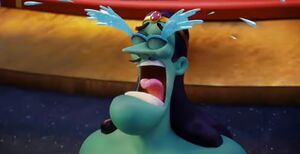 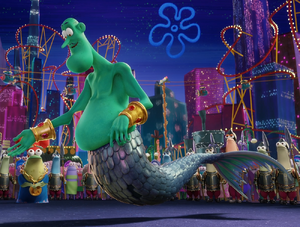 Poseidon's true form.
Add a photo to this gallery

Retrieved from "https://villains.fandom.com/wiki/King_Poseidon?oldid=4385114"
Community content is available under CC-BY-SA unless otherwise noted.